The Character Sheet for Ushio and Tora, including the main characters and their allies.

For the villains, go here. 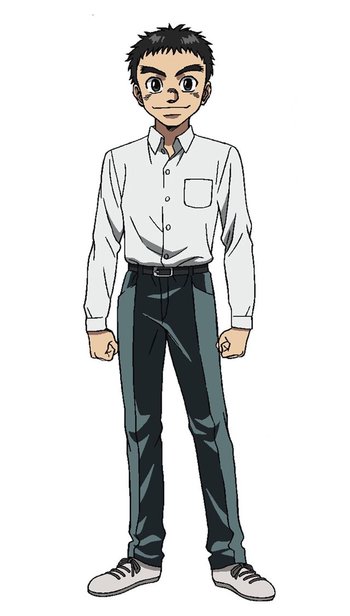 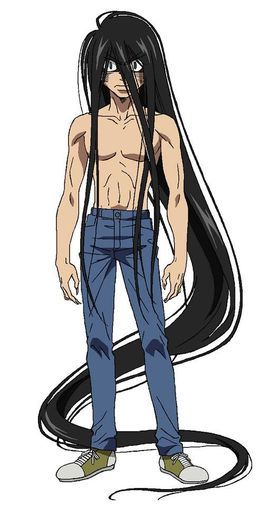 The protagonist of the series. His family maintains a temple in Japan, where 500 years ago, his samurai ancestor battled a monster to a standstill, and eventually trapped him against a rock using a cursed spear called the "Beast Spear". One day, Ushio accidentally unsealed the cave the monster was trapped in and ended up releasing him from the Beast Spear. Ushio then names him Tora and together they go to battle evil demons. 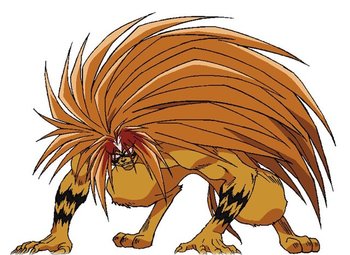 An tiger-like youkai who was trapped in the basement of Ushio's temple for 500 years and was released when Ushio pulled off the Beast Spear. He claims he wants to eat Ushio, but they eventually become true friends, not that they want to admit it.

Ushio's Close Ones and Allies 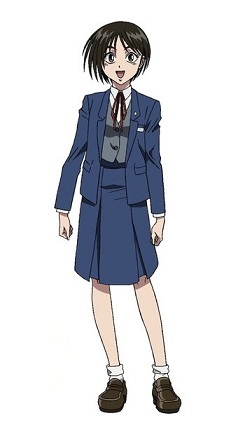 The tomboyish childhood friend of Ushio who happens to have a crush on him. 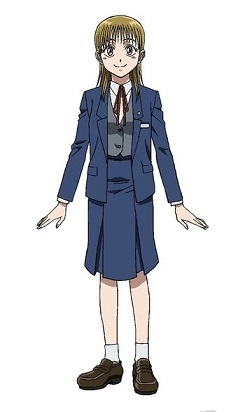 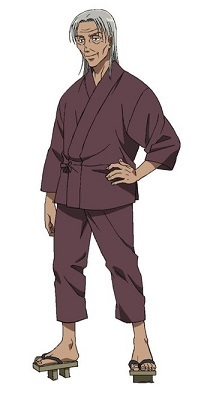 Ushio's father and the keeper of the temple he and his son live in. He goes off on travels, leaving his son on his own. His secret identity is being one of strongest priest of a special Buddhist sect named Kouhamei, dedicated to fighting youkai.

A girl from Ushio's school who is the daughter of an artist Ushio admired. She is haunted by the spirit of her father, who turned into an oni after his death and attacks any man who tries to get close to her. 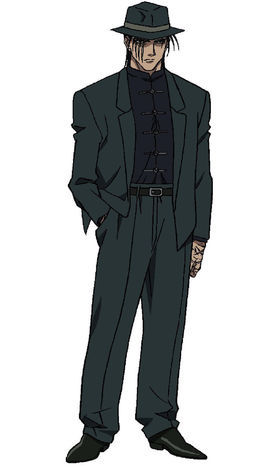 A powerful Chinese exorcist. He travels around China and eventually comes to Japan to seek the youkai who killed his wife and his daughter. Hyou initially thinks Tora is the one who murdered his family, but Ushio convinces him Tora is innocent, and Hyou later calms down a little, becoming a valued ally. 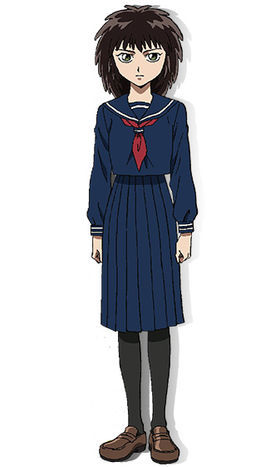 A young girl whose father was killed in an airplane crash caused by Fusuma, a flying demon. Initially she blamed her father's long-time friend Atsuzawa for the incident, but after helping Ushio to defeat Fusuma, she learns the truth and forgives Atsuzawa. 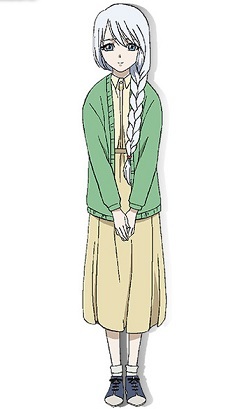 A young girl descended from a long line of white-haired women who have maintained the success of the Takatori household by appeasing the childlike spirit Omamori.

A Manga-Only character, Minoo is a dark-skinned woman from Shikoku who can control a ferocious Youkai known as Gedo. She's sent by her mother in Tokyo to find a Stray Gedo who's possessing people and turns up in the same school as Ushio and Tora, who are dragged in the fray when the Gedo appears. 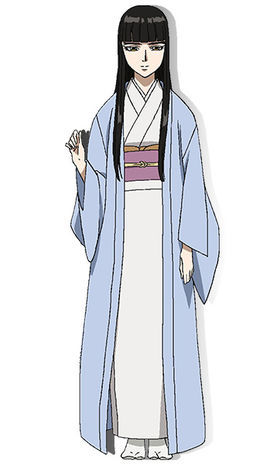 Ushio's mother who was presumed dead, until a Youkai told Ushio that she's alive and hated by all Youkai. Finding the truth about her becomes Ushio's motivation for his journey to Asahikawa.

The old and wise woman who's in charge of the Kouhamei Sect, a Buddhist sect who aims to preach the teaching of Buddha and to protect humans from Youkai. She was the former guardian of Hakumen, and her real name is Mikado Hizaki.

A massive bonze with a scarred face, he's the second in comand of the Sect. When the Second Oyakume dies taking down Kuragi, Nigira becomes the new head of the Kouhamei.

Manga-Only Character, Kyoura is an heretical member of the Kouhamei, expelled because of his excessive bloodlust and violence, but his demon-slaying skills and Dharmic powers are indeed without equal. He's Nigira's brother.

A young girl with great dharmic powers, she's the sister of Satoru, one of the four successors to the Beast Spear. 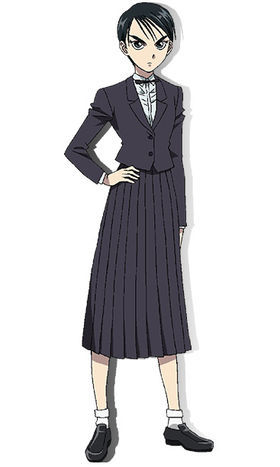 The first of the successors to appear. Hinowa is a tough, no-nonsense girl who appears to try to take the Beast Spear away from Ushio because she believes him to be unworthy of it. When she gets the chance to wield the Spear, it rejects her, returning instead to Ushio. Hinowa is still reluctant to acknowledge Ushio as the true bearer of the Spear, but she ends up helping him from time to time anyway. 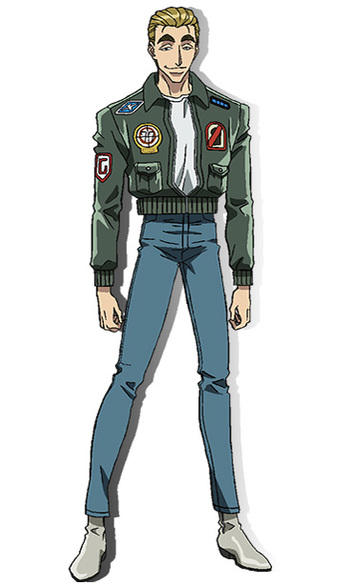 The second of the successors to appear. Unlike the others successors, Nagare isn't that bothered by Ushio bearing the Beast Spear and is for more interested in challenging Tora. After Tora defeats him, Nagare decides to help him and Ushio in their journey. 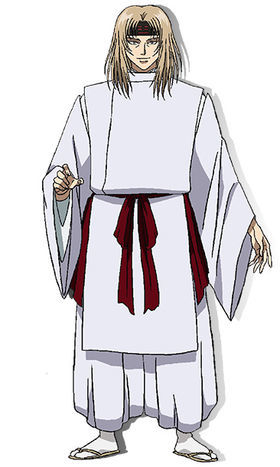 The youngest but also the strongest of the successors. He wields the Elzaar Scythe and is accompanied by a monster partner call Kuin.

Kirio's partner, an imposing bird-like monster of incredible power who's collected and logical, but loyally follows Kirio and protects him. He's something of a rival to Tora. 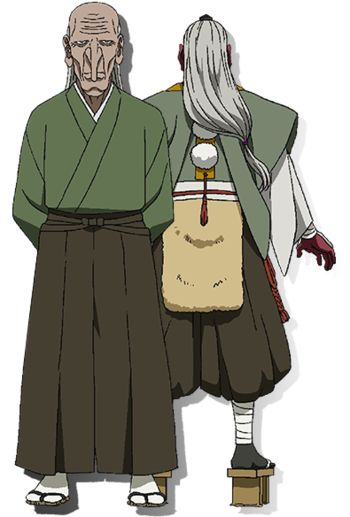 The leader of the Eastern Youkai of Japan, appears as an old man with a long, downward-pointing nose, but he's actually a Daitengu. Becomes an ally of Ushio after encountering him during his journey north. 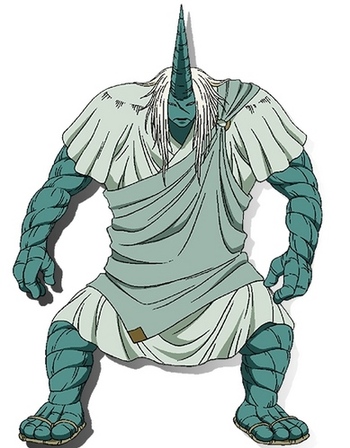 The Snake Monster from the East, Hitotsuki is one of the strongest eastern Youkai and fought Hakumen alongside Tora. He looks like a giant Oni-like brute, but his body is made up of intercoiled snakes. 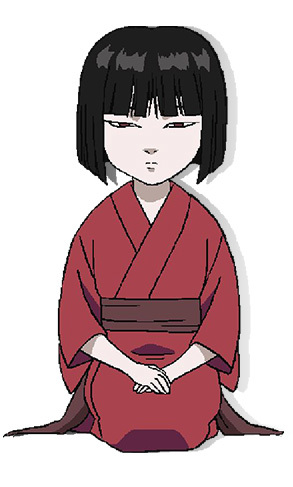 Also known as "Omamori Sama" (Lord Protector Deity), he was a child-like Youkai who brings good luck to a household, but was imprisoned by a sorcerer from the Takatori family and sealed in their mansion behind a barrier, with the white-haired women as his only company. Currently bound to Saya, he's fred by Ushio and Tora and follows Saya everywhere, helping Ushio whenever he can. 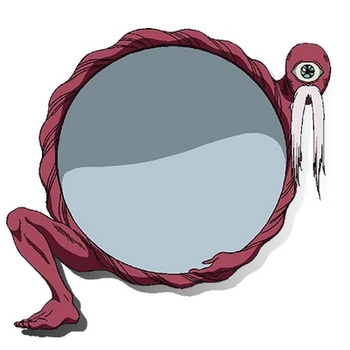 A mirror Youkai who lives in the mountains, Ungaikyo can talk to people through the mirror in his body and talk through all the mirrors of Japan. 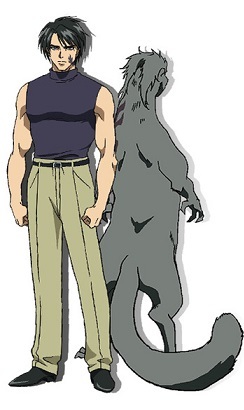 The eldest brother of the Kamaitachi siblings. He and his sister ask Ushio to kill their brother Juurou because he was being taken over by his hatred for humans and has became a threat to both humans and his siblings. 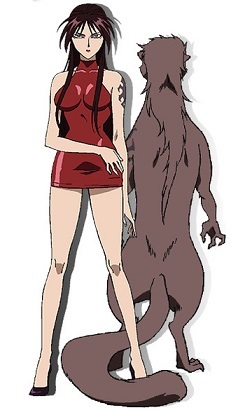 The youngest of the Kamaitachi siblings. She uses a medicine that can heal the injuries made by her brother Juurou. Although she supports Raishin's decision to have Ushio kill Juurou to stop his rampage, she still loves his brother and hates humans just like he does. 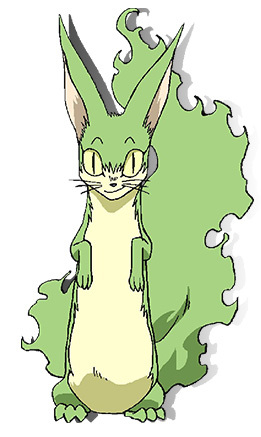 A small fox/ferret-like spirit send by the Osa of Tono to assist Ushio in his effort to purge the demons possessing Moritsuna. 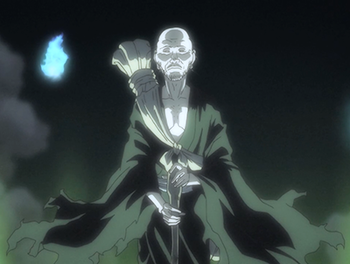 A sea Youkai taking the form of an old blind man carrying a lute on his back, he asks Nagatobimaru's help against the monstrous Ayakashi. He ends up revealing to Ushio that his mother is still alive and hated by all Youkai.

Manga-Only Character, Sanpitara is an Ainu God of the Land who resides in a lake. He's met when he tries to hire Ushio's friends as the new Kami of the lake in order to defeat the evil Oyau Kamui. He's among Ushio's allies in the north.

A Time-travelling monster with two bodies half-hidden behind a flat stone, Tokisaka can travel back in time, Tokijun can travel forward. They were enlisted by Jie Mei herself to explain the origin of the Beast Spear to Ushio.

The other two surviving head researchers, the Kirlian technology is their doing.

A western monster who was captured by H.A.M.M.R. in Europe, he befriends Asako and is dragged in the battle against the revived Hakumen fragment.

The Spirits of the Beast Spear

A highly skilled blacksmith from Ancient China. His parents were killed by Hakumen no Mono and his younger sister Jie Mei sacrificed her life to create the blade of the Beast Spear. Filled with anger, remorse and regret, he hammered his body into the shaft of the spear. His spirit is trapped in the darkness of the spear, unlike his sister, and can greatly influence the user of the spear with his fury. 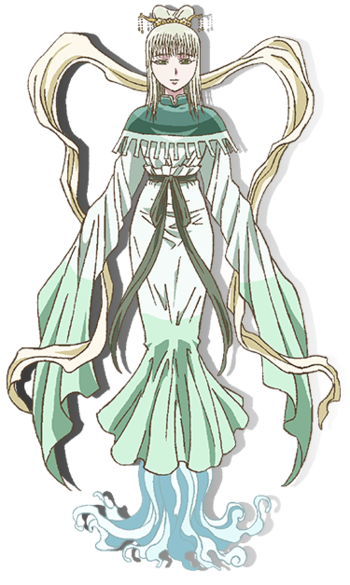 The spirit guardian who lives in the darkness of the Beast Spear. She is the sister of Giryou, who sacrificed her life to create the blade of the spear. Jie Mei is able freely materialize anywhere needed, and first appeared to help prevent Ushio from transforming into a Beast by having his soul totally absorbed by the spear.