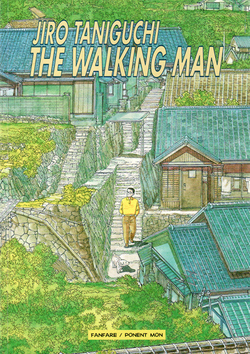 The Walking Man, or Aruku Hito in Japanese, is a series of short stories by Jiro Taniguchi centering around a man who enjoys walking around suburban Japan. There is little dialogue and no real plot to speak of; the manga focuses specifically on the man's experiences as he takes his walks, such as taking off his socks and shoes to climb a tree, or drenching himself under a faucet to cool off.

While Taniguchi is perhaps better known for the hard-boiled, dramatic Gekiga stories from the earlier part of his career, The Walking Man is more representative of his later output in that its primary focus is on the minor details of everyday life.