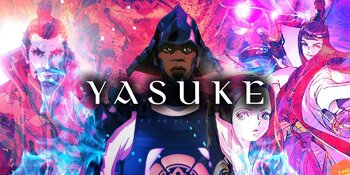 Yasuke is a Netflix original anime series co-directed by LeSean Thomas (of Cannon Busters fame) and Takeshi Sato with animation production by MAPPA. It premiered on the streaming platform in April, 2021.

Centered around the historical figure of the same name, the series follows an African-born samurai named Yasuke, who rose from a lowly servant of an overseas merchant to a trusted member of Oda Nobunaga's inner circle, sending shockwaves through the warlord's culturally conservative court. Twenty years after Nobunaga's death during the Incident at Honno-ji, Yasuke has become a masterless ronin, making his living as a simple ferryman. His destiny would be changed, however, when he is given the task of protecting Saki, a young sickly girl with incredibly mystical power. With the forces of darkness after Saki for her power, the Black Samurai of eld must take up arms again to safeguard her and see that she gets the life-saving treatment she needs.

It will also get a Manga Adaptation for Shogakukan's Monthly Spirits magazine by Satoshi Okunishi. It will first launch in the magazine's August issue this year on July 27.