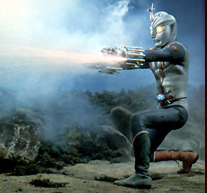 Ryusei Ningen Zone (Meteor Human Zone), better known in the United States as Zone Fighter, is a 1973 tokusatsu series from Toho, their second attempt at a superhero series after Warrior of Love Rainbowman. It is especially notable for crossing over with the Godzilla franchise.

The Sakimori family resembles a normal Japanese family, but they are in fact the alien Zone family who came to Earth after their home planet, Peaceland, was destroyed by the evil Garoga aliens and their kaiju weapons, the Terror Beasts. To stop the Garoga army's invasion on Earth, the Sakimori family's three children, Hikaru, the oldest son, Hotaru, the teenage sister, and Akira, the youngest brother, transform into the superheroes Zone Fighter, Zone Angel and Zone Junior, respectively. Zone Fighter can also turn into a giant hero to fight kaiju, but only for a few minutes. Zone Fighter must use several different powers to kill the Terror Beasts and stop the Garoga once and for all.

Zone Angel and Zone Junior will often help their brother recharge when he is running low on energy by shooting a beam into the capsule on the tip of his head crest or by using their aircraft called Smokey to fire a replacement capsule after the current one falls off. Zone Great, the grandpa, will sometimes help by pulling a lever which will send his energy into the sky and rain down on an attacking kaiju as a lighting bolt called the Thunder Bolt. The family friend Hideaki Obara is only human but will also lend a hand in stopping the Garoga. Godzilla (yes, you read correctly; it's that Godzilla) will also help from time to time, and the family even made a sort of "Godzilla Cave".

Zone Fighter's trademark power is his Meteor Missile Might in which wristbands filled with anti-kaiju missiles are fired. Unlike the armies', they actually kill monsters and are very accurate, to the point that they even rival Showa Mechagodzilla's Finger Missiles or Heisei Moguera's Spiral Grenade Missiles. He can also fire a Meteor Proton Beam which can blow up a kaiju with a single blast and is used on monsters too powerful to be killed by the Missile Might Attack; a stream of arrow shaped energy which can be either two little red stream, one large red stream, or two very short yellow ones; and a Subduing Mist which acts as a sort of drug to calm down a monster. Additionally, he can run at jet speed, fly, and make a Zone-Barrier to block projectiles or make a Hyper-Barrier to reflect projectiles back at the source.

The show sadly had a short run that failed to conclude the conflict between the Zone family and the Garoga due to the 1973 oil crisis and low ratings making it too expensive to produce. While the series has been criticized by many as a copycat of the Ultra Series, it has gained attention in later years for having Godzilla, Gigan, and King Ghidorah make guest appearances on the show. And as a 70s Showa era kids' Toku series, there are many silly moments in the show juxtaposed with surprisingly brutal Family-Unfriendly Violence. You haven't lived until you've seen Zone Fighter rip out a monster's eyes, cut off its arms, shoot off its head, and then fly its corpse into space just for cheating in ring toss. There's a lot of Monsters of the Week so you'll rarely see the same kaiju twice, especially given what happens to said monster.