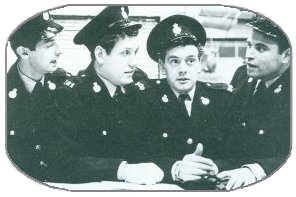 Z Cars is a British Police Procedural series that ran for nearly 800 episodes from 1962 to 1978. It broke new ground in realistic police drama, bridging the cosy Cop Show Dixon of Dock Green and the gritty The Sweeney. Also notable in that the early episodes were primarily acted and broadcast live rather than pre-recorded.
Advertisement:

In 1967, after a year in hiatus (during which Johns and Windsor moved on to star in the spin-off Softly Softly), Z Cars was relaunched with a new format and an almost completely new cast. The only characters to make the transition were Constables Weir and Lynch; Weir left a few years later, but Lynch remained a regular character to the end.

The title of the series refers to the radio callsigns used by police patrol vehicles in the series.

Z Cars had numerous spin-offs, all featuring Charlie Barlow, and many teaming him with John Watt.

No relation to ZZ Top or the Cool Car from their videos. Nor is it any relation to the sports car made by Nissan.