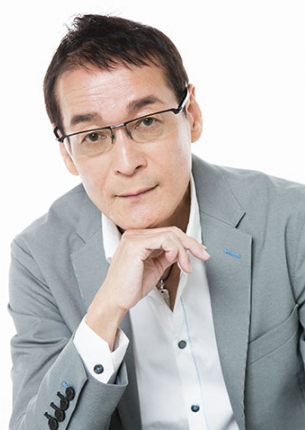 "HARRO, EVERY-NYAN! HOW AH YOU? FAIN SANKYUU!"
"Today is the day I become a god!"
"Foul demon... PERISH!"
Advertisement:

Norio Wakamoto, born on October 18, 1945 in Shimonoseki, Japan, was an anti-riot squad officer who saw action in the pro-leftist student protests in the 1960s/70s before he became a voice actor. He is well-known for his grandiose delivery and his tendency to get picked for a villain role. His range of villain roles is also quite wide, from manipulating and scheming to The Berserker type; whether it's of a high position or as an underling (as long as it's no Mook, and sometimes even then).

Villains, however, aren't his only forte (though it's undoubtedly what he's best at). He is also capable of doing humorous, perverted roles or, rarely, heroic types. Or even soft-spoken characters.

He is not only respected amongst Japanese and Western anime fans, but he is also very well respected amongst his fellow voice actors, to the point that many have tried doing a 'Wakamoto impression'. For example, this one

, as done by Tomokazu Sugita, Takahiro Sakurai, and Yūichi Nakamura. In fact, there was a competition in 2012 about imitating Wakamoto, judged by Wakamoto himself; the result remains unknown, however.

Uses the name "Hiruma Kyou-no-suke" when voicing for characters in Eroge.

A sample of his voicing can be found here

Not only that, there are also times where Jouji Nakata shares a few roles along with him, since he's mainly the second-in-line equivalent to Wakamoto when it comes to voicing villains. He also has one with Toshiyuki Morikawa, as in majority of times, Wakamoto plays the villain to Morikawa's hero.

ALL HAIL BRRRRRRRITANNIA!!!
TSUBURERU! NAGARERU! AFUREDERU! BONYUU IN OPPAI! BRRRRRRRAAAAAAAA!!!
(pause)
If these tropers do not wish for the advent of oppai...I shall become a pettanko! ALL RETURNS TO NOTHING!!! OOOOOORRRRRAAAAAAAA!!!
Oppai and Pettanko... Preposterous. Which one does tropers desire? I shall give you the answer... ALONG WITH THE INDEXES!!!* What is a troper? A miserable little pile of secrets. But enough talk, have some index! * Ha! Tropers, a cesspit of Edit War and Vandalism. Edit for them, and get your life ruined for their sins!
AAAAAAAAAHHHHHH!!!!
Heaven's nest is wide. It may be coarse, but nothing passes through. Psycho Crusher!!!
AMEN!!!