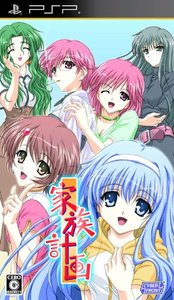 Tsukasa Sawamura does not like people. He believes people are meant to live on their own and forming attachments with others will only hurt him in the long run. Because of this he lives a quiet life on his own, working in a Chinese restaurant to make ends meet. One day he finds an illegal immigrant, Chunhua, collapsed in the alley behind his workplace and for some reason is unable to ignore her plight.

After he takes her in, events begin to spiral out of control and Tsukasa is forced to thrown in with an assorted band of misfits, each of whom has their own reasons for being alone. Together they form the Family Project, an alliance of convenience disguised as a typical Japanese family. Despite his doubts, he goes along with the idea and is caught in the middle of each member's respective problems and antagonism. Yet, as time goes by, he finds it harder and harder to rationalise the loner attitude that was once the cornerstone of his life.

Family Project was translated into English by G-Collections in 2009 and marketed as the crown jewel of D.O., a company perhaps better known for Kana: Little Sister. It is a slight departure for the writer as well, who is better known for his work on Kana as well as another Utsuge, Yume Miru Kusuri; Family Project has plenty of Tear Jerkers but the main focus is on challenging the traditional notion of "family" and working out what (or who) is really important in a person's life.