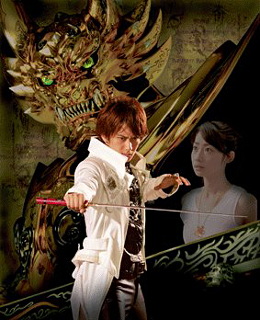 Where there is light, shadows lurk and fear reigns. Yet by the blade of Knights, mankind was given hope.

Created by Keita Amemiya, known for his work as character/monster designer on the Kamen Rider franchise, Garo is a Japanese tokusatsu TV series notable for being targeted at an adult audience, as opposed to being a Merchandise-Driven kids' show. It is also noteworthy for being more Horror oriented, it uses high-quality CGI on a weekly basis and it has several untransformed fights featuring the actual actors doing the fighting instead of stunt doubles.

In the GAROverse, the Makai Knights are a secret order of warriors who hunt down the Horrors: monsters born from the darkness of human souls. Kouga Saejima is a Makai Knight who has inherited the title of GARO from his father. By thrusting his sword upwards and drawing a halo, Kouga can summon an invincible suit of golden armour that he can wear for no more than 99.9 seconds. With the aid of his familiar Zaruba, a magical ring, he spends his nights hunting down and slaying the Horrors that have possessed humans.

One day he meets Kaoru Mitsuki, a struggling artist with a string of bad luck and an uncanny ability to cycle through different occupations incredibly quickly. When she is accidentally splashed with the blood of a Horror, it leaves her tainted and with one hundred days to live. The law of the Makai Knights dictate that she should be struck down, but Kouga decides to leave her alive as bait to draw out other Horrors. Thus, Kaoru is pulled deeper into the taboo underworld of Makai Knights and Horrors, and into the life of Kouga Saejima.

Later, another Makai Knight by the name of Rei Suzumura arrives with a murderous vendetta against Kouga. With the self-awarded title "ZERO" and the ability to summon a suit of silver armour, Rei has discarded his responsibilities as a Makai Knight to seek revenge for the death of his lover.

Has nothing to do with the enemy from The Legend of Zelda: Majora's Mask that Bob is a member of.

Tropes in the Series: