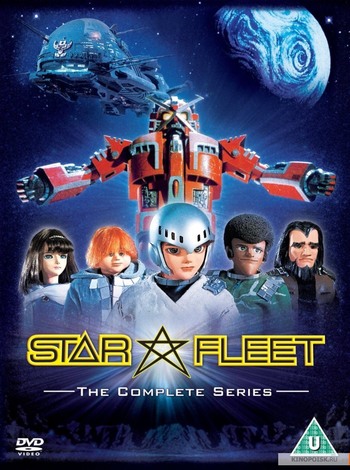 Left to right: Lamia, John Lee, Shiro Hagen, Barry Hercules and Dr. Benn with the Dai-X standing above them and the Imperial Alliance battlecruiser top left.
Star Fleet is an early '80s Japanese Sci-Fi show with character and mecha designs from Go Nagai. Known in Japan as X-Bomber, the show is notable for using miniatures and marionettes rather than cel animation, giving it a very unique look. Also distributed in France and Spain under the title Bomber X.
Advertisement:

The year is 2999, and Earth is at peace after a long stellar war. This peace is shattered by the arrival of Commander Makara and her giant Imperial Alliance battlecruiser. After making light work of the Earth Defence Force, they approach Earth and threaten to destroy it unless the Earthlings hand over F-01. The people of Earth have no idea what this even is, and the Alliance isn't buying any pleas of ignorance.

In order to counter the attack the EDF launch the experimental X-Project, consisting of the prototype battlecruiser X-Bomber and three fighter craft that can combine to form the robot Dai-X.

With the attack repelled, the crew of the X-Bomber set out to discover the secret of F-01, a secret they must discover before the Imperial Alliance do, or the universe is doomed.

Not hugely successful in its native Japan, the show was very popular in the UK. The combination of being superficially similar to the much loved Thunderbirds, and the fact that the show didn't shy away from many tropes that were mostly unknown in kids programming in Britain at the time made it a Gateway Series for British kids of a certain age. It even inspired the album Star Fleet Project, where Brian May and Van Halen performed together.

Oh, and this has nothing to do with The Federation Starfleet or the Star Fleet (Though it does feature John Baddeley and Sean Barrett, two of the actors from that series).