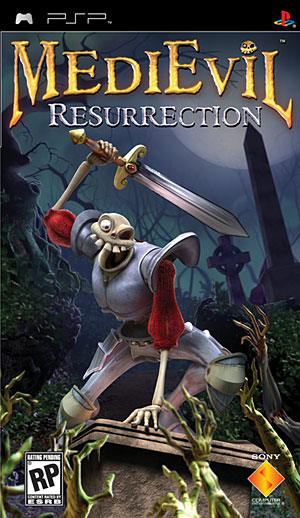 MediEvil: Resurrection is a remake of MediEvil, released on PlayStation Portable in 2005.

Much like the original, the game follows the skeletal failed knight Sir Daniel Fortesque, who was slain at the battle of Gallowmere against the demon horde of the evil sorcerer Zarok.

A hundred years to the day, Zarok has returned and discovered a spell called the Evernight, throwing Gallowmere into eternal night, stealing the souls of the populace, and raising the dead from their slumber. Unknown to Zarok, the spell also effects his old nemesis, Sir Fortesque, who gets a second chance in undeath to prove himself and save the land.

He comes to discover that an ancient genie, Al Zalam has been living in his skull the entire time he's been dead, cursed to stay there by Zarok, and who convinces Dan to go after the sorcerer. Along the way, they speak with Death who reveals to them that the only way to defeat Zarok is to find the four pieces of the Anubis Stone, which are scattered across the land and held by various trusted keepers.It's up to Dan and his skull-mate to track the pieces and Zarok down, and save the land from its terrible fate.

Compared to its predecessor Resurrection plays out very, very differently. Levels are heavily altered and in some cases non-existant, the gameplay is much slower and more methodical, there are new levels and locations, and vastly different story progression and characterization. It also does its very hardest to be more comedic, adding a lot more silly fluff text and dialogue, and ditching a lot of the eerie mysticism from the original.

In MediEvil: Resurrection, the Pumpkin Witch is portrayed as a manic woman that switches between "sweet" and "bitter" at the drop of a hat.

In MediEvil: Resurrection, the Pumpkin Witch is portrayed as a manic woman that switches between "sweet" and "bitter" at the drop of a hat.