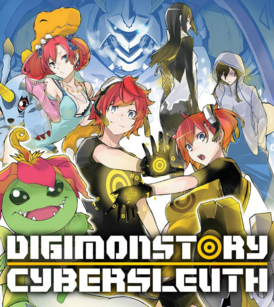 When the digital and real worlds cross, our story evolves.
Advertisement:

Digimon Story: Cyber Sleuth is a Digimon game for the PlayStation Vita, developed by Media.Vision and published by Bandai Namco Entertainment. It falls within the Digimon World DS/Digimon Story series, being its fifth installment (though characters from Digimon World Re:Digitize make minor appearances), and is the first game of its home series to be on a Sony console rather than the DS. It is also the first Digimon work to be aimed exclusively at an older audience, a departure from the franchise's previous attempts to remain a children's franchise with a hopeful Periphery Demographic.

The premise takes place in a world with an online network called "Cyberspace EDEN", effectively a "physical" version of the Internet. An underground network of hackers exists under its layers, rumored to be using living computer programs called "Digital Monsters".

One day, while hanging out in a chatroom, the protagonist (Takumi or Ami Aiba, whose name and gender can be set by the player) receives a message telling them to log into EDEN to receive a "wonderful present". They and two others in the room decide to take up the offer and enter Cyberspace to test it out, but in the process they're given the "Digimon Capture" that lets them scan and capture Digimon and cornered by a monster called "Eater" that manages to latch onto the protagonist's leg, causing them to log out as a half-digital, half-physical entity. They're rescued by a detective Kyouko Kuremi, who offers to help them find out how to recover their body — in exchange for helping her with some cases revolving around the network, Digimon, and Cyberspace EDEN. And that's only the tip of something looming over the surface...

The first official trailer can be seen here

, though it's in unsubtitled Japanese. The game was released in Japan on March 12, 2015. Like Re:Digitize, the game's art is by Suzuhito Yasuda (of Durarara!! fame), while the music is done by Masafumi Takada (of No More Heroes and Danganronpa fame) and the CGI is done by Kamikaze Douga (of Fire Emblem Awakening fame). In addition to its main story mode, the game has a thriving multiplayer component (both ad hoc and online play) which has inspired a budding tournament scene

Against all odds, it was finally confirmed for a Western release for 2016

, with an additional PS4 version for retail and the Vita version for download, making this the first Digimon game to be localized since Digimon World Championship in 2008. note  2014's Digimon All-Star Rumble was only released in North America and Europe with no word on a Japanese release.

Digimon Story: Cyber Sleuth Complete Edition, a Compilation Rerelease containing both games came out for the Nintendo Switch and PC via Steam on October 18, 2019.