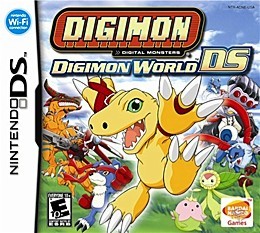 Digimon World DS is the localized name of a game in the Digimon franchise that was released for the Nintendo DS in 2006. In Japan, it was released as Digimon Story, making it the first in the Story subseries.
Advertisement:

The story follows your character, whose gender and name is yours to choose, who's heard rumors of strange creatures fighting one another and alongside humans. Curious, the player character goes to the school computer lab to do some investigating. Naturally, a portal to the Digital World opens, and our hero quickly winds up finding the Tamer Union and becoming a Digimon Tamer.

As usual, you play a tamer who lands in the Digital World to discover it's under threat from evil. The game largely followed the format of Digimon World 3, but included a different battle style.

The game was followed by several sequels, including Digimon World: Dawn and Dusk and Digimon Story: Cyber Sleuth.