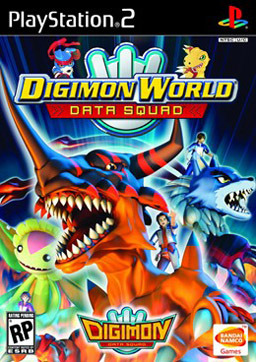 Digimon Data Squad marked a rebirth of the franchise and with it the release of a new game. Digimon World Data Squad (known as Digimon Savers: Another Mission in Japan) is a 3D turn-based Eastern RPG where you play as the main character of Savers, Marcus, but can also control other Digimon.
Advertisement:

The story adapts one possible arc from the anime. The main opponents are the seven demon lords and it's up to the player to find out how they are being reborn, as well as to prevent them from reaching their goal. As you investigate, you will also be required to battle frequently, as well as discover Optional Bosses (including Moon=Millenniummon).