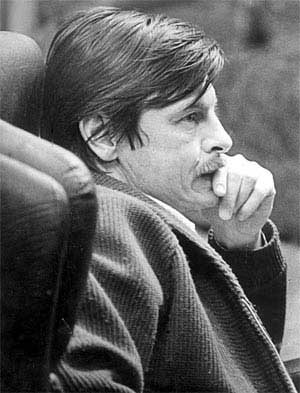 "Tarkovsky is for me the greatest, the one who invented a new language, true to the nature of film, as it captures life as a reflection, life as a dream."
— Ingmar Bergman
Advertisement:

Andrei Arsenyevich Tarkovsky (Андре́й Арсе́ньевич Тарко́вский, April 4, 1932 – December 29, 1986) was a Soviet film director, writer, and theorist. His family had a literary background, and he studied art, music and language at school. But during the Great Patriotic War, his father was drafted and Andrei, his mother, and his sisters had to evacuate. He caught tuberculosis and recovered in a hospital. He dropped out of university and decided to become a prospector. He was sent to Siberia and, in the wilderness there, discovered film.

Tarkovsky entered the State Institute of Cinematography after finishing his expedition in Siberia. By this time, Stalin had died and Khrushchev was opening up the Soviet Union, so Tarkovsky was able to see and study the films of such greats as Ingmar Bergman and Akira Kurosawa, influencing him to become an auteur. This openness also led him to explore many themes in his films, such as man's role in the world, dreams vs. reality, the nature of religion, morality and freedom of choice.

His films were controversial with Soviet authorities because Tarkovsky dared to ask these heavy questions instead of accepting their dogma. This gave his films extra credentials outside the Soviet Union, especially in the West, whose film critics gave high praise to each of his films. However, recognition at home would have to wait until after his 1986 death from cancer, which came just as Mikhail Gorbachev was opening the Soviet Union again. Tarkovsky was posthumously awarded the Lenin Prize in 1990, and the Russian government created the Andrei Tarkovsky Memorial Prize to award the country's most talented filmmakers.

Tarkosvky is one of the best-known Russian/Soviet directors, along with Sergei Bondarchuk, Sergei Eisenstein, Andrei Konchalovsky, and Nikita Mikhalkov, and his films have gained many awards.

Tropes about or used by Tarkovsky: