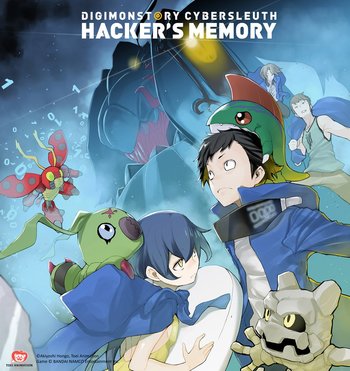 The Other Side of Cyber Sleuth
Advertisement:

Digimon Story: Cyber Sleuth - Hacker's Memory is a Digimon game for the Playstation 4 and PlayStation Vita and follow-up to Digimon Story: Cyber Sleuth, with a new story unfolding within the events of Cyber Sleuth. Development is once again handled by Media Vision, and Suzuhito Yasuda and Masafumi Takada have returned to do character designs and music respectively. It was released on December 14, 2017 in Japan.

The protagonist's EDEN account has been hacked and been falsely accused of account raiding. Consequently he becomes a hacker to get down to the bottom of this and discover the truth, joining up with the hacker group, Hudie and utilizes the mysterious programs known as "Digimon" to fight hostile hackers. Along the way, the world he knows goes under a great upheaval and he desperately tries to protect his friends and his place in the world.

Unlike the game's predecessor, localization and release in the US and Europe were announced soon after its reveal and it released on January 17, 2018. Like its predecessor, it is available physically and digitally for the PS4 and digital only for Vita. The game was bundled with its prequel in Digimon Story: Cyber Sleuth Complete Edition for the Nintendo Switch and PC via Steam and released on October 18, 2019.