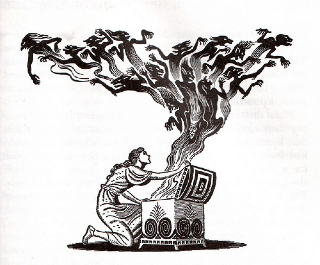 "I hope it's not too late to return this."
"Ancient folk saying: 'You can catch the devil, but you can't hold him long.'"
— Rod Serling, from The Twilight Zone (1959) episode "The Howling Man"
Advertisement:

Either way, if a Sealed Evil is introduced into a story, expect it to escape at some point. This brings up the primary question "Why did they just seal it, as opposed to kill it?" The answer tends to vary; but usually it's a variant of The Punishment (for both the sealed and everyone else), Thou Shalt Not Kill (heroes can take pity and/or show mercy towards the oddest things), and/or As Long as There Is Evil. Maybe it couldn't be killed for good (or more commonly, the conditions weren't right to deal the final blow), so sealing it was the next best thing. Another common excuse is the Balance Between Good and Evil; if they'd killed the ancient evil, then a bigger, badder evil would've taken its place, thus sealing it away neutralizes the threat but also keeps it in the world and maintains the balance. And a good excuse that is often used is that the evil was way too strong, so even the most powerful heroes of the past couldn't kill it, but the sealing spell worked just fine. Or maybe it was killed and the method of breaking the seal was resurrecting it.

This is an extremely common plot and backstory in video games, especially Role-Playing Games, because it's such a simple backstory: the Big Bad, put away by some ancient hero, has escaped, and you (the player) must put them back in/kill them for good. Or, as mentioned above, the current Big Bad wishes to release the Greater-Scope Villain to use its power, and the hero must stop them. With the second plotline, you can expect the heroes to fail to stop the unsealing, and the sealed evil to be the Final Boss instead of the direct Big Bad, and for the sealed evil to promptly bring about the Darkest Hour, only to be defeated anyway. Presumably, if the sealed evil was never going to be released, it never would have been mentioned in the first place.

If the seal isn't all that tight, then it's a Leaking Can of Evil.

The precise nature of the Can can vary considerably, although a few forms crop up more often than not. In some cases, the evil is imprisoned inside a physical object, sometimes a surprisingly small one such as a lamp or a box; other times, its prison may be any sort of mundane but very thoroughly-sealed cavern, chamber or prison cell. It may also take the form of a Monster in the Ice, in which case it's fairly common for the entity to have become this accidentally. In more extreme cases, the evil is trapped within a pocket dimension or was expelled from the universe altogether.

May be caused by Supernatural Sealing. Depending on the nature of the seal, the evil may or may not be able to perceive or interact with the immediate surroundings of the prison, or have anything to really do . In the case that it cannot and does not, the Fridge Horror (And I Must Scream) is usually never addressed or acknowledged, mainly to keep people from feeling sorry for the villain, even though the Driven to Madness aspect could easily make for a villain who's even worse when unpackaged than they were when they were first sealed in.

In some cases, the sealed Evil comes to the conclusion that Being Evil Sucks, and decide to undergo a Heel–Face Turn, becoming Evil Redeemed in a Can.

Compare Put on a Prison Bus, when a character (usually a villain) gets arrested instead of being magically sealed away. Not to be confused with Monstrous Seal. That trope refers to animal seals.

My Little Pony My Little Pony: Friendship Is Magic has had at least four examples of this in the show; unsurprisingly, it shows up quite frequently in its fanfiction as well.