Literature / The Nine Peahens And The Golden Apples 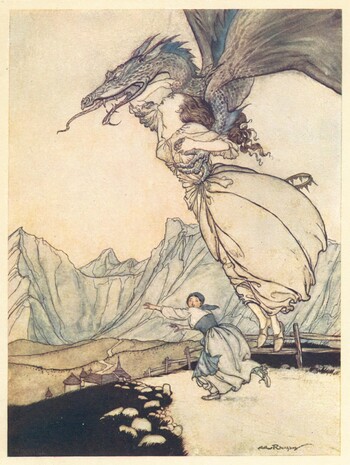 "The dragon catching the queen" by Arthur Rackham (1916)
Advertisement:

A king owns a fruit tree which bears golden apples every night. However, all apples are stolen every night. The king orders his three children to investigate the matter, but the youngest son is the one who manages to solve the mystery: nine peahens descend upon the tree every night, eat its apples and fly away just before dawn. He also finds out one of the peahens can turn into a beautiful woman, and the prince and the lady start meeting every night under the apple tree. Unfortunately, his older brothers are jealous of his success, so they hire a witch to sabotage their nighttime dates.

The witch succeeds in scaring the peahens forever, and the prince sets off on a journey to find his lover. After a long quest, he finds her again and finds out she rules over her own kingdom. The prince and the empress get married, and he moves to her palace, but he is warned against going into the twelfth cellar. During one of her absences, the prince investigates the cellar, and he finds one cask bound with iron hoops. Someone has been imprisoned in the cask and is thirsty, so the prince takes pity on it and gives him water. When its thirst is quenched, the prisoner bursts out of the casket and reveals to be a dragon; then it kidnaps the empress and flies away.

The prince sets off on another journey to find his wife. After a while, he meets the dragon's lair and attempts to make off with his wife, but he is quickly caught by the dragon thanks to its impressive horse. The dragon decides to spare his life just this once, but the prince concludes that he needs a horse who can outrun the dragon's steed.

The empress subtly goads the dragon into revealing his horse was given by a witch, so the prince travels to the witch's mountain, saving several animals on the way, and requests one of her horses. The witch promises to give him any horse of his choice if he takes care of her mare for three days. The prince accepts, but the wild, sapient mare runs away and transforms into a different animal every time his back is turned. Nonetheless, the animals whom he previously saved help him find her and carry out his task, whereupon the witch reluctantly lets him pick one horse.

Once again, the prince makes off with his wife, and the dragon gives chase. Though, the prince's horse talks the dragon steed's into turning against his master. The dragon is kicked off his mount, falls on a rock and breaks in pieces.

The fairy tale can be read in Andrew Lang's Compilation

. The Bulgarian version can be read in the SurLaLune site

It is classified as Aarne-Thompson type 400, "The Swan Maiden", and ATU 400, "The Quest for the Lost Wife". It also shares some elements with "East of the Sun, West of the Moon" and "The Death of Koschei the Deathless".