Fanfic / The Power of the Equinox 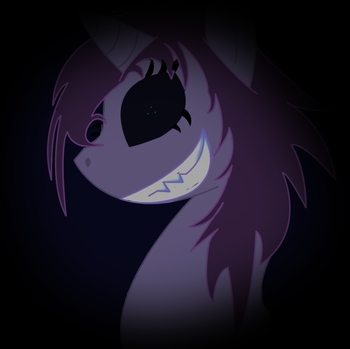 "The Power of the Equinox

" is a My Little Pony: Friendship Is Magic Fanfic written by Shaded Blood

, set during "A Canterlot Wedding".

After Queen Chrysalis imprisons Twilight Sparkle in the crystal caverns, she drives her into exhaustion with her taunts before leaving her to suffer alone. In her frustration and desperation, Twilight strikes a black crystal, releasing from it a malevolent and destructive creature known as the Entity. Resonating with the hatred growing within Twilight, the Entity enters her body and transforms her into a monstrous and carnivorous mare with a new variety of powers. No longer considering herself Twilight Sparkle, she finds the real Princess Cadance and proceeds to stop Queen Chrysalis' plans, renaming herself as Dimmed Star.

Being in the constant danger of being completely possessed by the Entity, Dimmed Star tries to come to terms with her new essence and violent tendencies, while her family and friends as well as Princess Celestia try to find a way to return her back to Twilight Sparkle. Will Dimmed Star even want that?