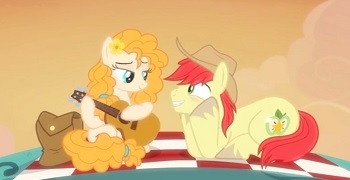 While shopping at the Ponyville Market, Apple Bloom is given a free jar of pear jam from Grand Pear, an elderly stallion who has recently moved from Vanhoover back to Ponyville. When she takes it home, Applejack and Big Mac rush to hide the jar from Granny Smith. Once Granny is out of earshot, Applejack warns Apple Bloom that there was a feud between the Apples and the Pears, but they realize they don't know the nature of the feud when Apple Bloom asks about it. Since Granny refuses to talk about it, they decide to visit their cousin Goldie Delicious in order to learn about this part of the family history.

Goldie shows the Apple siblings that before they were born, the farm next to Sweet Apple Acres was owned by the Pear family. Under Grand Pear's management, the Pears engaged in a fierce business rivalry with the Apples. The only two family members who saw eye to eye were the youngest, Pear Butter (Grand Pear's daughter) and Bright Macintosh (Granny's son). The Apple siblings recognize Bright Mac as their father's name, and Goldie reveals that their mother, Buttercup, was originally named Pear Butter before marrying Bright Mac. They're all shocked to learn they are half-Pear.

Goldie can't provide more details (partially because her cheetah is guarding the next volume of the Apple family history), so she suggests they talk to Burnt Oak, Bright Mac's friend when they were colts. Burnt Oak recalls that as they grew older, Bright Mac became smitten even more with Pear Butter, but Grand Pear discovered this and kept her away from him. Burnt Oak directs them to Mrs. Cake, who was Pear Butter's friend while they grew up. She similarly notes that Pear Butter was smitten with Bright Mac too, with Granny intervening in their relationship as well. Despite their elders' wishes, the two continued to see each other in secret, and they carved a rock showcasing their love for each other in the woods between the farms. The next day, Grand Pear decided it was time to move the Pears to Vanhoover under the pretense of having more space to expand their orchards, so as to put an end to the couple's relationship. Teary-eyed, Pear Butter told Bright Mac that she needs to stay with her family and prepared to leave with them.

Mrs. Cake takes the Apples to Mayor Mare, who explains that on the eve of the Pears' departure, Bright Mac had arranged for her to marry him and Pear Butter in secret, with Burnt Oak and Mrs. Cake as witnesses. To show their lasting love for each other, they planted an apple and pear seed at the base of the rock they carved before as part of their wedding vows. Grand Pear and Granny Smith discovered the marriage, and Grand Pear insisted that Pear Butter leave with her family. She refused, claiming that the Apples are her family now, too. While Granny showed compassion and took Pear Butter in, Grand Pear disowned her on the spot and moved with the rest of the Pears the next day to Vanhoover.

Both Mrs. Cake and Mayor Mare know their stories are harsh, and didn't know the best time to tell the Apple siblings, but Applejack believes that now is the time to reconcile the past bitterness. They first go to see Grand Pear, who reveals he really returned to Ponyville to make amends for the mistakes that have kept him from his family for years. The siblings readily forgive him and accept him as their grandfather, and then take him to see Granny Smith who, after a bit of hostility, realizes Grand Pear has put aside the feud. Recalling the stories they heard, the siblings realize that Bright Mac and Pear Butter did leave a legacy for their families to remember them by. They take Grand Pear and Granny Smith to the carved rock in the middle of the woods, where the elders are surprised to discover that the seeds that Bright Mac and Pear Butter planted have grown into two highly intertwined apple and pear trees around the rock. The five hug and remember the couple.

The seasons change and leaves may fall
But I'll be with you through them all
And rain or shine, you'll always be mine

And you should not blame me, too
If I can't help fallin' in love with you...