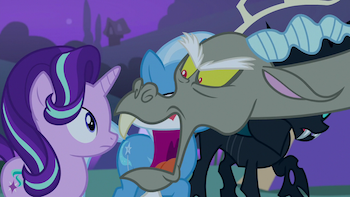 While moving boxes of books in Twilight's library, Starlight Glimmer receives an invitation from her old village to take in the Sunset Festival for the town. While Twilight encourages her to go, Starlight is still haunted by the things she did as the town's leader, nervously wondering if the ponies there will hold a grudge. At night, Starlight dreams of the ponies from her village mocking her and insulting her, prompting Princess Luna to step in. While Starlight is relieved that it's all a dream, Luna says that the emotions it represents are real, and she should talk to her friends about it. The next morning, Starlight confides in the Mane Six that she's nervous, so they suggest bringing along a friend to help. To Twilight's disappointment, Starlight chooses to bring Trixie with her, and the two set out.

Once they arrive at the village, the ponies are actually quite happy to see her. In fact, they begin to ask Starlight numerous questions about how the Sunset Festival should be run. Overwhelmed, Starlight panics, pushing the ponies away with her magic. Trixie uses her smoke bombs to help give her a hasty exit, with a dejected Starlight saying that she doesn't want to be in charge of anything else. Trixie quietly admits that even she makes mistakes, and the best thing to do in that situation is forget about it and move on.

Back in Ponyville, Starlight notices everypony acting strangely, with the Mane Six all behaving incredibly snidely and rudely, along with none of them seeming to remember that Starlight headed back to her old village. That night, another dream has Starlight confronted by her friends, but she realizes quickly that it's another dream. However, a panicked Princess Luna appears and warns Starlight that changelings have kidnapped her and the other princesses, and that she needs to get help. Though frightened, Starlight gets Trixie to spy on the Mane Six in the castle. They use a device to communicate with Queen Chrysalis, the changeling leader, who confirms that the princesses have been kidnapped, and even replaced with phonies. The queen also says that since they thought "too small" in their attempt to claim Canterlot last time, they will now conquer all of Equestria.

After slipping out of the castle thanks to a cloaking spell, Starlight suggests going to the Crystal Empire to get help from Princess Cadance. However, Thorax the friendly changeling appears, who confirms that Cadance's family has also been taken. As they despair over who else could possibly help them now with both the Mane Six and the Royal Family the prisoners of the changelings, the nigh-omnipotent Discord arrives; he is initially quite uncaring about the whole situation, until he hears that Fluttershy has also been taken, and he transports them to the Changeling Hive. Starlight looks on nervously, unsure of how to proceed...

Continued in "To Where and Back Again – Part 2".