Recap / My Little Pony: Friendship Is Magic S7 E8 "Hard to Say Anything" 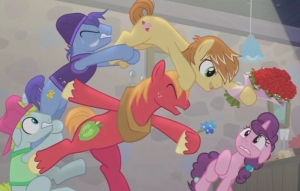 Love hurts, especially when your paramours fall over on top of you.
"I think my brother has a crush!"
— Apple Bloom
Written by Becky Wangberg
Advertisement:

The Cutie Mark Crusaders notice that Big Macintosh has been making several apple delivery runs to Starlight's old village lately. As he leaves Sweet Apple Acres to go make his fifth delivery that week, the Crusaders suspect he must have some ulterior motive for going so often. They sneak aboard his apple cart, arriving at Starlight's old village to find Big Mac delivering the apples to the baker, Sugar Belle. She has been using the apples in her baking, but laments that she has limited space for the desserts on her store's shelves. Seeing that Big Mac is smitten with Sugar Belle, Apple Bloom deduces that he has a crush on her.

The Crusaders insist that Big Mac tell Sugar Belle, and he agrees. However, just as he knocks on her door, a suave earth pony named Feather Bangs pushes Big Mac out of the way and offers Sugar Belle a large bouquet of roses. Big Mac walks away rejected, but the Crusaders insist he try again. Sweetie Belle brings out a book on fairy tales, saying that grand romantic gestures will always win the heart of the "fair maiden." Big Mac tries "saving" Sugar Belle from an engineered robbery, but Feather Bangs returns her bags first. When Big Mac tries waking up a napping Sugar Belle with a kiss, Feather Bangs knocks him out of the way. Finally, the Crusaders suggest wooing Sugar Belle with a song. Big Mac and Feather Bangs end up vying for her attention with competing songs, but the spectacle ends with them destroying her shelves and desserts. She angrily tells both of them that she doesn't like grand gestures and asks them to leave her alone.

Looking through Sweetie Belle's book, Big Mac reflects that Sugar Belle is kind and sweet, but also a real pony instead of a fairy tale princess. Sweetie Belle realizes that they should have been thinking of what she might want, and Big Mac comes up with a way to apologize and enlists the Crusaders' help. As Scootaloo distracts Sugar Belle and Sweetie Belle keeps watch, Big Mac and Apple Bloom build a new, larger display case for the bakery. Sugar Belle excitedly thanks Big Mac and admits that she likes him, and the Crusaders apologize for putting him up to his ridiculous efforts to win her affections. The lesson they've learned is that romance is not about making grand gestures, but doing special things for the other pony in the relationship.

Feather Bangs tries to woo Sugar Belle again, but the Crusaders tell him that she is spoken for and point him toward three mares who have been swooning over him ever since his arrival in the village. When he nervously tells them that he has no idea of how to talk to mares, they offer to help him start a conversation with them.

Hard to Trope Anything: