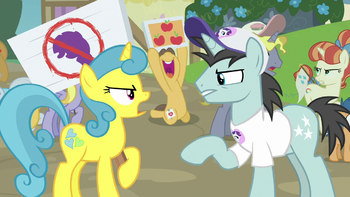 Fandom rivalries are magic... or not.note Lemon Hearts, go home. You're fan-drunk.
"What? Really?! Are you attacking my friend because you want to be in a book?!"
— Starlight Glimmer
Written by M.A. Larsonnote Though it should be noted out of respect that Larson has made it clear he is not happy with the end product and effectively wrote it against his will, and that he even leaves it off of his list of episodes he's written

Twilight Sparkle comes across two fillies named Toola Roola and Coconut Cream arguing and throwing food at each other. She patiently takes the two aside and explains that friendship isn't always easy, but it's worth fighting for. While this satisfies them, Twilight can't help but feel that it sounds familiar. She goes to her castle and finds it written down in the old Friendship Journal the Mane Six used when they wanted to write down something they'd learned about friendship.

With Starlight Glimmer's help, Twilight creates fresh copies of the book for all of her friends. She then suggests that they publish the journal so its wisdom can help others. The Mane Six all agree, and soon the journal is a sell-out sensation across Equestria. Unfortunately, Twilight soon realizes that ponies are buying the journal just because it features a Princess, or admiring some lessons and panning others — as two snobbish ponies demonstrate by insulting Rarity's stories within her earshot, causing her to run off in tears.

Elsewhere, Pinkie Pie (the "funny one") is surrounded by a living laugh track; Fluttershy's 'admirers' criticize her for failing to stand up for herself (but find her less charming when she does); Rainbow is swarmed by fillies who want to hear about her adventures (several dozen times in a row); and Applejack is overwhelmed by freeloaders who consider themselves honorary Apples. When Twilight finds Rarity "stress sewing" to deal with the ponies who are boycotting her, she returns to the castle wishing she'd never had the idea to publish the journal.

Starlight insists that Twilight shouldn't blame herself because other ponies are failing to understand the friendship lessons. She departs on a mission of her own, while the Mane Six attempt to reason with their quarreling Loony Fans outside the castle. Unfortunately, their song about learning to appreciate their own flaws falls on deaf ears; the angry mob again fail to understand and resume their arguments. As they retreat into the castle, Starlight returns with Coconut Cream and Toola Roola, who tell the Mane Six that they read the journal and learned to be better friends from what it taught them. Touched, Twilight and her friends resolve to focus on their friendship (which will last), over the whims of their 'fans' (which won't).

The reactions ponies have to Twilight Sparkle's journal is a blatant parody of the Brony fandom.

The reactions ponies have to Twilight Sparkle's journal is a blatant parody of the Brony fandom.