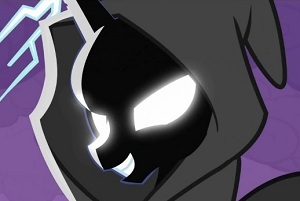 The Darkhorse Returns!
Princess Luna: Citizens of Ponyville! We have graced your tiny village with our presence! So that you may behold THE REAL PRINCESS OF THE NIIIIGHT!
Written by M.A. Larson
Advertisement:

Nightmare Night has come to Ponyville, and Twilight Sparkle and Spike are enjoying the spooky festivities (even if nopony recognizes Twilight's costume as the famous unicorn wizard "Star Swirl the Bearded"). They join Pinkie Pie, Zecora, and a group of young ponies (including Pipsqueak, a young colt whose family had just recently moved from Trottingham) for a walk in the woods to a statue of Nightmare Moon, where tradition indicates that they leave some of their candy to appease the evil goddess so she doesn't gobble them up. But what's that swooping in on a chariot pulled by bat-winged pegasi guards? Is it the real Nightmare Moon, returned to seek revenge on the Elements of Harmony?

No, it's just Princess Luna, who's come to enjoy the festival, bask in the accolades of her subjects, and turn the night of terror into a night of delight. But her grandiose entrance, booming voice, and archaic way of speaking gives the wrong impression, scaring nearly everypony in the town square. Twilight, who recognizes social awkwardness when she sees it, decides to help. She convinces Luna that she needs to tone it down a bit, so the two go to see the expert in being soft-spoken: Fluttershy.

Unfortunately, Fluttershy is not the sort of pony who enjoys Nightmare Night, and Twilight has to literally force her to give Princess Luna a quick speech lesson. After a few false starts, Luna finally understands and joyously hugs Fluttershy... who, alas, is limp and speechless with fear. Of course, this is just as Pinkie Pie and the kids show up for a place to hide from Nightmare Moon; they immediately get the wrong impression and run away screaming.

Undeterred, Twilight has Applejack teach Luna about getting along with the citizens of Ponyville. To get Luna to loosen up and have some fun (a phrase Princess Luna is apparently unfamiliar with), Applejack teachers her a simple target-throwing game with rubber spiders and a fake web. Quickly getting the hang of the game, Luna briefly basks in the admiration of her subjects before rushing over to save Pipsqueak from drowning in the apple-bobbing tub. Unfortunately, both Pip and Pinkie Pie misinterpret this act as another fright from Nightmare Moon, and the ponies freak out yet again. In a fit of pique, Luna turns the fake spiders into real ones; when this drives the ponies into a terrified riot, she decrees the end of Nightmare Night forever, then leaves in a huff.

With ponies young and old upset about the ban, Twilight tries to get Luna to change her mind by getting her to make amends with Pinkie Pie, the cause of all the trouble. Unfortunately, their touching reconciliation is spoiled completely when an ill-timed prank from Rainbow Dash causes Pinkie to panic. Twilight intercepts Pinkie before she can run away again and starts to lecture her about Luna's benevolent nature, whereupon Pinkie reveals that she knows Luna is good...

Pinkie was just pretending to freak out because sometimes it's fun to be scared. This gives Twilight an idea...

Back in town, Zecora proposes that, despite the holiday being cancelled, they can still finish tonight's celebration. So, the zebra leads the young ponies back to the forest to make one last offering of candy for Nightmare Moon... But then, Nightmare Moon shows up in person to thank them for their gift! As the little ponies run off screaming, she is revealed to be a transformed Luna, who wonders what good Twilight's plan will do... until Pipsqueak comes back to ask if she can do it again next year.

Finally understanding that the ponies don't really hate her, Luna rescinds her ban and finally begins to enjoy the festival in earnest, especially when she playfully gives Rainbow Dash a much-deserved taste of her own medicine. Meanwhile, Twilight composes a report to Celestia about the importance of helping others make friends, no matter how intimidating they may first appear.

As of February 11th, 2012, this episode is recognized by The Hub as the best Friendship is Magic episode out of the first 38 to airnote the 37 from "Friendship is Magic, part 1" to "Family Appreciation Day" plus "Hearth's Warming Eve".

The art team had some fun on this episode when designing costumes for everypony. Even the background ponies get some nifty outfits.
DOST NOT THOU APPRECIATE THE EFFORT WE HAVE PUT INTO THIS SYNOPSIS? HATH THY TROPING ENJOYMENT NOT BEEN DOUBLED?
Feedback

Being a Temporal Fish Out of Water from her millennium-long banishment, Princess Luna is still stuck with an outdated royal protocol. Which happens to include addressing her subjects with a loud, booming voice.

Being a Temporal Fish Out of Water from her millennium-long banishment, Princess Luna is still stuck with an outdated royal protocol. Which happens to include addressing her subjects with a loud, booming voice.