The Law of Fan Jackassery 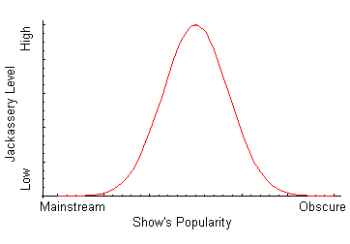 The amount of jackassery in a fandom is a function of the fandom's obscurity.note A unimodal function, that is, but if we start off with a word like "unimodal", pop! The readership disintegrates.

This means that the proportion of jackasses to normal people sharply increases with the obscurity of the fandom until it reaches a peak, then sharply drops off again.

For fandoms not too far from the mainstream, the fanbase is larger, and therefore its native level of jackassery becomes more representative of the baseline level of jackassery in the population at large. Jackassery is discouraged because the community is large enough to drown out the voices of individual jackasses. note Even if this doesn’t discourage the jackasses, it at least makes them less noticeable.

As you move away from the mainstream, fandom becomes geekier, composed of people who are, at best, less normal, and often, less sane.

However, beyond a certain level of obscurity, the size of the fandom drops to a point where it can no longer support an elevated level of jackassery: if the whole fan community consists of six guys, they just stop hanging out with the guy who's a giant jerk. Thus, for example, the fans of The Hermux Tantamoq Adventures are some of the nicest people you'll ever meet. All three of them.

Peak jackassery occurs when obscurity is sufficient that acting like a normal human being is no longer expected of the fans, but the fan community remains too large and diverse to make a unified stand against the jackasses. See also: Fan Dumb, Misaimed Fandom, and Why Fandom Can't Have Nice Things.