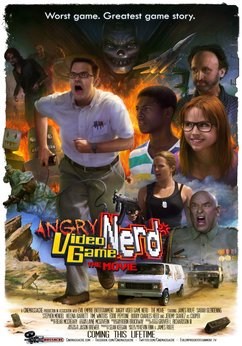 It's time to turn history into shitstory!
"I've had so many adventures within these four walls. I need to take the adventure outside! I need to go do something bigger! Something to top everything that I've already done! But how do I do that?"
—The Nerd himself
Advertisement:

It stars the titular Nerd and centers around the infamous mass burial of the ET game, deemed by many to be one of the worst games, if not THE worst game, of all time. The game just so happens to be the one game the Nerd never plays, and after being pressured by fans to review it, he decides to embark on a quest to prove the burial is a hoax and that there's nothing really there. Then federal authorities step in, led by our Big Bad, General Dark Onward, who believes the Nerd is investigating Area 51 and a UFO crash.

Since the movie is independent, James made an Indiegogo to raise money, with a goal of $75,000. About four months after the campaign was started, fans had raised over $325,000, becoming the 2nd highest online fan-funded movie ever.

The movie's production ended officially in December 2013, and the finished product premiered on July 21, 2014 at Grauman's Egyptian Theatre. It was screened at other theaters through July and August, and went on video-on-demand on September 2nd. It was officially released for VOD on YouTube and Vimeo.

This shitload of fuck contains the following tropes: