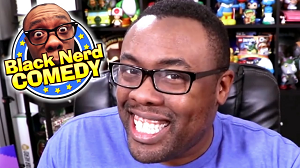 Andre Meadows is a black man who loves cartoons, old-school video games, Nickelodeon, and feet, and gives his rants and opinions on them on his YouTube show titled Andre the Black Nerd. In addition to reviews and thoughts, he also has "Awkward Talks with Girls", where he talks to nerdy women about various nerdy things, and inevitably asks them if he can rub their feet. He is often seen wearing nerd glasses and a shirt with some video game or cartoon-themed aspect, and sometimes a pixelated tie.

Before creating Andre the Black Nerd, he had a presence on the web where he had a comic strip named "Andre's Wildest Dreams", about himself and some fictional characters as middle school students, and also had fictional interviews with celebrities.