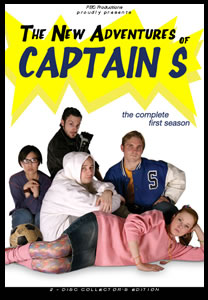 The New Adventures of Captain S is a Web Video series debuting in 2007.

Sega Genesis nerd Chad Belmont buys a strange game cartridge and when he plugs it in, finds himself sucked into the realm where games are real. As the Video Defender he's called upon to save the worlds of different games and in the process often learns a lesson that helps him with his problems in the real world. After a few episodes his friends Lunk and Becky learn Chad's secret and support him on their side of the screen.

The first season consisted of ten episodes each running about 10-15 minutes. In 2009 the staff announced that due to unspecified production difficulties, a second season was being called off. Later, it was revealed that ScrewAttack required them to wrap up the airing - not just the shooting - of the episodes by August, so that a DVD could be released in November. At the end of May, shooting had not begun yet, so the team thought that meeting the deadline was completely impossible.