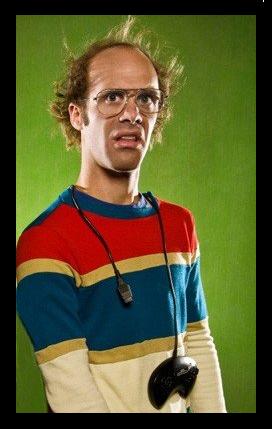 The man himself.
The New York Examiner wrote a story on me recently. They're like, "Keith Apicary has the mind of a 14-year-old boy, and the body of your uncle." But what they forgot to mention is that I've got the energy of the Ultimate Warrior, the agility of the Heartbreak Kid, and the durability of Mankind!
— Keith Apicary

Talking Classics is a mockumentary-style Web Video Series produced in the late 2000s by actor and comedian Nathan Barnatt, who portrays the character Keith Apicary.

Keith Apicary is a 28-year-old gaming geek who is starring in a late '90s web documentary. Keith is an archetypical loser: balding, socially awkward, a Casanova Wannabe, and not very bright. He's a huge fan of video games, particularly more obscure ones like SNK's Neo Geo, various Sega consoles like the Genesis and Dreamcast, and Nintendo's Virtual Boy. Many of the videos are interviews with Keith as he talks about and reviews these games or consoles. They're often interspersed with scenes of his daily life, which is... interesting, to say the least.

Nathan also records appearances in-character as Keith at gaming conventions such as PAX, E3, and SGC. He goofs around with his fans, pulls stunts, has awkward conversations with random people, and gets into bizarre hijinks. Not coincidentally, he has been kicked out of many conventions.

The series can be watched either on Screw Attack