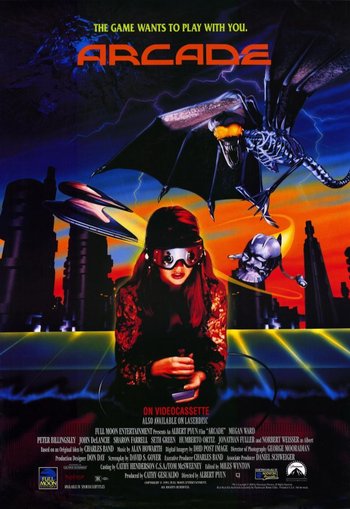 Arcade is a 1993 sci-fi/horror film directed by Albert Pyun.

Alex is a troubled teenage girl, whose mother committed suicide. She and her friends visit a local arcade and decide to try out a new VR game called Arcade, produced by a gaming company called Vertigo/Tronic. Difford, the company's CEO, is giving out free home console versions of the game to promote it. The game turns out to be visually impressive (for 1993) but Nintendo Hard.

Alex's boyfriend tries out the game and appears to vanish. Everyone assumes he went home, but no one can find him afterwards. She soon realizes that the game is trapping losing players in its virtual reality. This appears to also happen with the console version, which is somehow connected to the main game. Alex and Nick, the only friends who are not yet trapped, visit Vertigo/Tronic and meet the game's programmer. The guy explains that the game is Powered by a Forsaken Child due to Executive Meddling, and this is somehow imbuing the game with supernatural properties. He provides the teens a walkthrough for the game, which Alex tattoos on her arm (for some reason, the tattoos are visible in the VR game).

They resolve to enter the game and try to reach the end in order to beat it and free their friends. Nick confesses his love for Alex, but she makes it clear the feeling isn't mutual and continues trying to free her boyfriend. In the game, Nick ends up losing, but Alex continues on, seeing her friends being used as NPCs. She uses the walkthrough to successfully navigate the virtual world, while the game tries to stop her with images of her dead mother. Alex manages to beat the game and free her friends.

The original ending is more hopeful, while the revised ending implies that Alex has also freed the soul of the above-mentioned forsaken child to roam the earth and do evil.