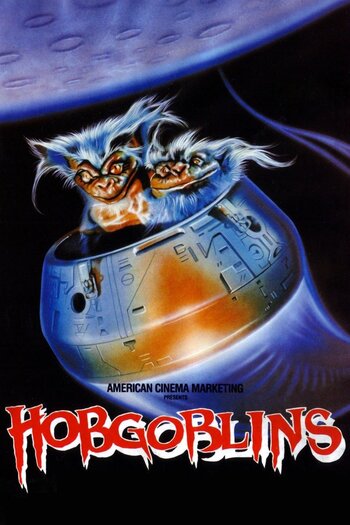 McCreedy: There's been an accident at the studio...
Crow: We made Hobgoblins!
— Mystery Science Theater 3000
Advertisement:

Slightly dorky Everyman Kevin gets a job as a security guard at an abandoned film studio mostly to impress his cold and domineering girlfriend Amy. One night, he chases a burglar into an old film vault which his boss, McCreedy, warned him not to enter. By doing so he releases the titular hobgoblins, little furry aliens who have the power to make any person's deepest fantasies come true and then use those fantasies to kill said person.

This movie is probably best known for being featured on a particularly memorable episode of Mystery Science Theater 3000. Rick Sloane, the movie's director, actually requested that the film be featured on the show. Despite this, Sloane and his film suffered some of the harshest riffing that the show ever dished out. Series writer Paul Chaplin commented that the film "[shot] right to the top of the list of the worst movies [they had] ever done". Nonetheless, the choice of this film led to the creation of an episode that many fans of the show consider to be one of the best.

Sloane would later be known as the writer/director of the equally low-budget and ineptly-made Vice Academy series of films which were a ratings hit for the USA Network.

To this day, it is one of two movies ever covered on Mystery Science Theater 3000 that had a sequel released after it was featured on the show (the other was Return of The Killer Shrews).