Film / Once Upon a Warrior 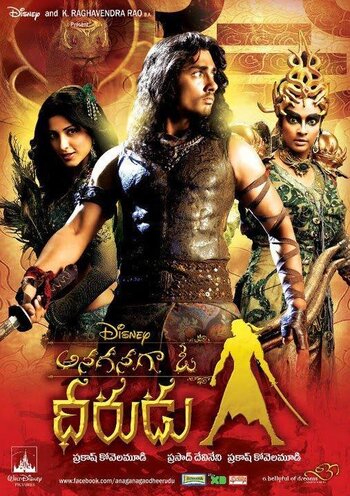 Yes, that's the Disney logo on the corner of this poster... of an Indian film.
Advertisement:

Once Upon a Warrior, or Anaganaga O Dheerudu is a 2011 Indian fantasy-action adventure film produced as a joint-venture between Arka Media and Disney World Cinema.

In ancient India, the powerful Snake-sorceress, Irendri, whose cult once dominates the world with an iron fist, has returned after her defeat entire centuries ago. Reviving her Snake Cult, Irendri intends to make herself invincible and indestructible, by absorbing the life-force of a child, Moksha, who is gifted with psychic powers, during an eclipse.

A hero stood in Irendri's way, opposing the vile sorceress' plans of world domination. The warrior Yodha, once a proud soldier but now a blind man living in a circus, who sees Moksha as his surrogate little sister, will battle Irendri's forces of darkness to prevent her from completing the ritual.

The movie is released during the 2011 Sankranti festival, to moderate box-office success and above-average reviews. It's also the recipient of two Nandi awards — one for Best Villain over Lakshmi Manchu's portrayal of Sorceress Irendri — and one Filmfare Award. Unfortunately it's not really enough to hold Disney's interest of collaborating with Indian filmmakers, making this their first and only co-production with India.

Once Upon A Warrior, Twice Upon A Troper: