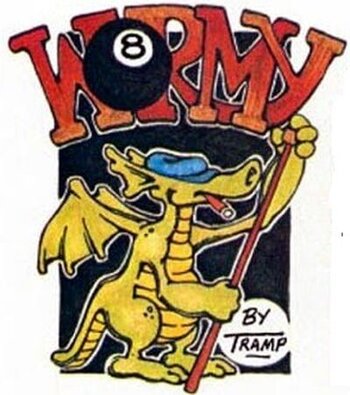 Wormy is a fantasy comic created by David A. Trampier. Tramp, as he signed his work, was the top illustrator for then fledgling TSR and designed much of the look for Advanced Dungeons & Dragons. Despite this, Wormy has only a loose association with Dungeons & Dragons — drawing more on early Tabletop War Games.

More specifically, Wormy is the lead character. A charming, intelligent, streetwise dragon in a baseball cap who'd rather hustle pool than kidnap maidens. His closest companion is the imp Irving, who lives in Wormy's rather immense underground home. But Wormy's got enemies too, enemies that will stop at nothing to get their claws around his neck....

One interesting note is that almost all of the characters are giants in some form or another. This gives Tramp great opportunities to play with perspective and resulted in some very handsome scenery.

A Wormy archive can be found online