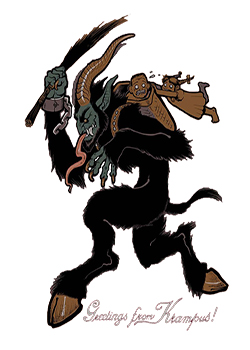 Really just fills you with that old-time Christmas Spirit, doesn't he?
Sei nur brav und niemals keck,
Dann der Krampus schaut um's Eck.translation "Be only well behaved, and never saucy, (for) the Krampus is looking around the corner."
— Message on greeting cards on Krampusnacht
Advertisement:

In the Alpine regions, Krampus takes the form of a giant demon covered in goat, bear, or ram fur, his head sporting large horns with a long, slavering tongue often hanging out of his mouth. Depending on the story, Krampus may have chained shackles on his wrists, signifying his enslavement to St. Nicholas. Generally though, Krampus will be wearing several large bells (as a warning to any who hear them that he's coming), along with a large wicker basket and birch rod. If someone has been bad, Krampus will either threaten a beating with his birch rod or actually give one. If his target has been particularly bad, then Krampus stuffs them into his wicker basket, and drags them off to punish them for their crimes. Depending on the story, Krampus will either bring them to St. Nicholas's home, Krampus's own mountain underworld, Hell, twelfth-century Moorish Spain, or simply Scare 'Em Straight and bring them back home.

Traditionally, young men in Southern Germany, Austria, Hungary, Czechia, Switzerland, Croatia, Slovenia, and even Northern Italy dress up as the Krampus during the first two weeks of December, particularly on the evening of December 5, known as Krampusnacht, and roam the streets in grand, sweeping parades through town. Often, they will go after adults in the audience who are in on the fun, especially tourists encountering their first "Krampus Parade" or attractive young women. Curiously, despite their fearsome appearance and reputation, the (plural) Krampusi are generally fairly kind to children, generally exempting them from the shenanigans they pull on the adults.

Despite the frightening overtones, Krampus is quite a popular character in the Alpine countries. He brings some harmless "scary" fun to the Christmas season, not unlike what happens at Halloween. He is also not alone as the companion of St. Nicholas. Compare him with Knecht Ruprecht,

a German character who performs a similar role (though more as a stern authority figure than a nasty devil), Zwarte Piet,

a Dutch character said to put bad children in a sack and take them to Spain, the Lady Perchta,

a female version of Krampus who can either be drop-dead gorgeous or hideously ugly, Père Fouettard

putting naughty children in a sack and bringing them to hell, and The Yule Lads,

a group of 13 Icelandic troll-like beings who historically caused mischief during Christmas, but became more Santa Claus-like in modern times. See also Bad Santa, which the Krampus is occasionally portrayed as. If The Krampus and Santa Claus are the same person, see Santabomination.

If you're looking for the 2015 horror movie, see Krampus.