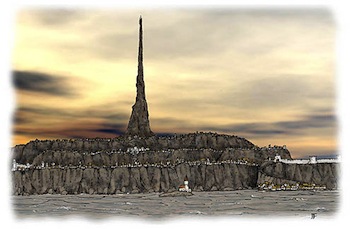 Ptolus: Monte Cook's City by the Spire is, according to Monte Cook (a co-creator of Dungeons & Dragons 3rd Edition), the most deluxe campaign setting ever. Almost seven hundred pages long, not including the many other materials that came with it as PDFs on a CD inside the cover, it's a massive, detailed view of a world, and in particular one city, that runs on the Dungeons & Dragons rules. This was one of the last major products before Fourth Edition.

Ptolus was originally published by Malhavoc Press for D&D 3rd Edition in 2006, soon before the release of 4th Edition. In 2021, updated versions were released for Fifth Edition and Cypher System following a successful Kickstarter campaign. The new versions are, again, almost 700 pages long, and come with a thick folder of maps, tables, forms, handbills, and signs in the back.

This book/setting provides examples of: