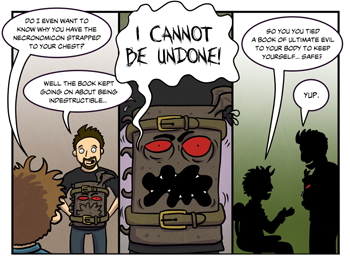 In an insane world it's the only sane choice.
Mal: Sim? Want to get a beer after work?
Sim: That would interrupt my prayers for death.
— Cthulhu Slippers: The beginning of the end

is an office comedy webcomic set after the return of H. P. Lovecraft's Great Old Ones. Written by Andrew Jack and drawn by Natalie Metzger it chronicles the misadventures of Mal, Sim and Zoe, three humans stuck working for Cthulhu Corp after the end of the world.