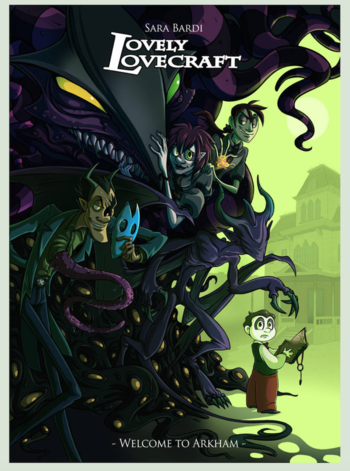 Mysterious scholar Randolph Carter disappeared after he was accused of murdering his friend Harley Warren, and now Carter's abandoned house in Arkham, Massachusetts, is up for grabs. The only ones willing to rent it are the cash-strapped (and slightly dotty) widow Mrs. Lovecraft and her troubled young son Howard Phillips Lovecraft. Howard soon discovers that Carter owned a strangely damaged copy of the Necronomicon, and he accidentally uses the book to summon a beast called a Night Gaunt, who claims to be a servant and friend of King Randolph Carter. Meanwhile, a very strange substitute teacher arrives at nearby school of the supernatural Miskatonic University, and a patient with no past causes trouble in an asylum. These three tales soon become tangled, with Howard and his new Night Gaunt friend Phil diving into the Dreamlands, struggling to understand why the cruelest of the Outer Gods is seemingly trapped in a mortal body, and above all, seeking Randolph Carter and the answers he might know.

This webcomic, by Deviantart contributor Sara Bardi, is ongoing. It can be read both online at Deviantart and in a published compilation. A homage to Cthulhu Mythos creator H. P. Lovecraft, the webcomic features a fictional child version of Lovecraft himself as protagonist, and other characters and creatures are drawn from stories such as The Statement of Randolph Carter, The Dream-Quest of Unknown Kadath, Pickman's Model, At the Mountains of Madness, and others.