Literature / At the Mountains of Madness 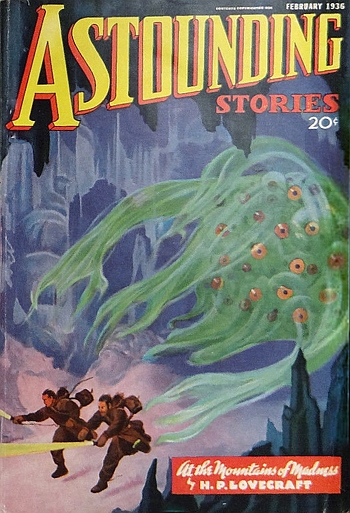 The Elder Things' jello salad has been in the fridge a little too long.
Advertisement:

At the Mountains of Madness is a 1936 novella by H. P. Lovecraft, serialized in Astounding Stories magazine. It revolves around the geologist William Dyer, leader of an expedition to Antarctica. While digging for ice cores, his team uncovers the frozen bodies of creatures of indeterminate origin; later, most of the expedition is mysteriously slaughtered. Dyer's party discovers the ruined camp, and he and a graduate student fly over the mountains into mystery to investigate further. They soon find themselves beyond massive mountain peaks, in the ancient ruins of a colossal city, completely alien in design...

A film adaptation, directed by Guillermo del Toro and produced by James Cameron, was in the works,

but was cancelled after the failure of the Wolfman reboot.

However, it seems Del Toro has restarted his efforts to make the film

Has been adapted twice as a radio drama, first by the Atlanta Radio Theater Company and later as part of the Dark Adventure Radio Theatre series. A Comic-Book Adaptation was also done by I.N.J. Culbard, as well as a manga adaptation by Tanabe Gou.