Literature / Cards on the Table 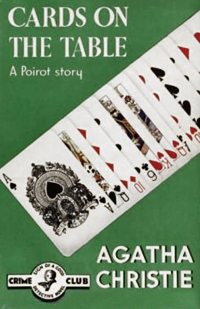 Cards on the Table is an Agatha Christie detective fiction murder mystery first published in 1936. The mysterious Mr Shaitana, who boasts of being a "collector of murderers", hosts a dinner party to which he invites four "specimens" of his collection along with the famous Belgian detective Hercule Poirot, crime novelist Ariadne Oliver, Superintendent Battle of Scotland Yard, and Secret Service man Colonel Race. After some provocative discourse on the subject of murder, Shaitana invites his eight guests to play Bridge, while he retires to his armchair by the fire, where he is promptly murdered. In investigating the murder, Poirot uncovers some dark secrets in the lives of all four suspects.

The book was made into a stage play in 1981, and adapted for the TV series Poirot in 2005, the latter of which strayed considerably from the original story. Tropes for the 2005 adaptation are listed on the page for the TV series.

The 1936 novel provides examples of: