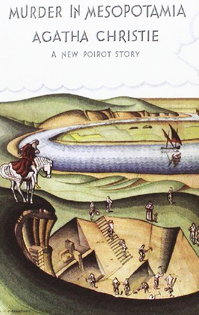 A mystery novel by Agatha Christie, featuring Hercule Poirot, and first published in 1936.

During a visit to an archaelogy dig in the Middle East, Poirot is faced with investigating the murder of Louise Leidner, the wife of famous archaelogist Dr. Eric Leidner.

Many years ago, she had been married to Frederick Bosner, a covert spy, who died tragically in a train accident. After his death, she began receiving death threats (allegedly from her former husband) warning her not to remarry. However the letters had abruptly stopped when she married Dr. Leidner. But, sometime before her death, she had received another letter and had begun seeing visions of a face in her bedroom window at night. Poirot soon suspects that someone at the dig knows of Mrs. Leidner's past marriage and is possibly related to her late husband...

The novel was adapted into an episode of series eight in the ITV series Poirot. Tropes unique to this adaptation are listed on the page for the series.