Death by Looking Up 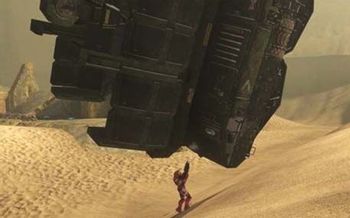 The shadow was the first clue.
"The funny thing is, the closer it gets, the more it looks like a piano."
— Frankie Boyle, Mock the Week, "Unlikely Last Words"
Advertisement:

Although killing off characters by dropping large objects on them is something normally reserved for cartoons, it still happens occasionally. But the universe (cough, writers, cough) appreciates irony far more than it should, and therefore sees fit that any character who is killed by a falling object will look up and see it just in time to be flattened.

They will usually be alerted by a whistling sound, combined with the rapidly growing shadow of the object that is around them. It is rare (but not unknown) for characters to leap out of the way. Usually they instead choose to stare at it in shock until they are crushed. Of course, it's fairly surprising to see a piano bearing down on you in the middle of the sidewalk, and this is very much a case of Truth in Television. Sometimes, a character, if trying to invoke the trope on someone they are fighting against, will also point up slightly to hint that they should look up, to which the enemy inevitably falls for it just as they are flattened.

Keep in mind that, as this trope is particularly common in cartoons, where characters are almost impervious to permanent damage, this trope does not always actually result in death.

Super-Trope of Falling Chandelier of Doom. Almost always used with Death from Above. Contrast Disney Villain Death. As a Death Trope, all Spoilers will be unmarked ahead. Beware.

Bond shoots a a giant chandelier, Zao looks up and screams as it crushes him.

Bond shoots a a giant chandelier, Zao looks up and screams as it crushes him.