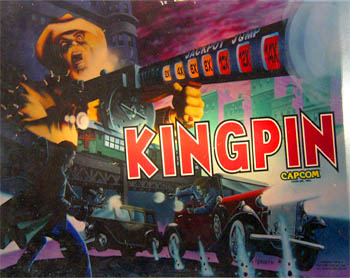 "Fisk? Harrelson? You're next!"
Kingpin: "Welcome to the Big City, Kid!"
Advertisement:

Kingpin is a 1996 Physical Pinball Table from Capcom, designed by Mark Ritchie and illustrated by Stan Fukuoka.

Set in The Roaring '20s, you take the role of "The Kid," the ambitious new member of the Big City's criminal underground. Ingrain yourself by delivering stolen goods, gunrunning, heisting trains, and paying off crooked cops, then relax with some slots at the Hotel Lex. Increase your firepower with the Two-Ball Fury, the Three-Ball Raid, and the Arms Race, and collect the Power-Up Payola to build up your Strength Meter. Finally, set your sights to the top of The Syndicate itself — take out the various lieutenants in your way, then confront the Kingpin himself in a shootout for control of the Mob.

Kingpin was developed for Capcom by Mark Ritchie after his non-competitive clause with Williams Electronics had expired. It was slated to begin production after Big Bang Bar, but Capcom closed its pinball division before manufacturing could begin. As a result, only eight near-complete prototypes exist; it sometimes appears at trade shows and expos, drawing crowds looking for a chance to play this rare title. Although Gene Cunningham of Illinois Pinball Inc. has announced plans to reverse-engineer it for wide release, no official release has been announced yet, and the few remaining games are highly sought after by die-hard collectors.