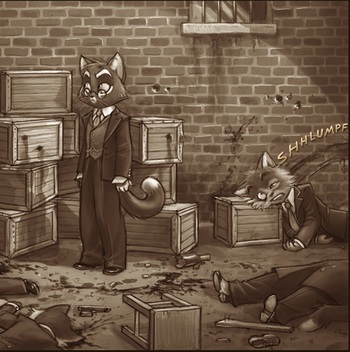 A picture is worth a thousand words, but sometimes, even a nice still image won't do. You want to really emphasize on your point, in this case, the fact that the place you're showing is a mess, so what do you do? Make something fall over in the background, obviously, so the audience knows just how much the place is in shambles. This trope will usually play out in two ways:

In both scenarios the trope is invoked for comedic effect, although the former one is usually to show how badass the characters are that they are nonchalant as if big fights trashing buildings are normal and expected (as per the Rule of Cool), while the latter is a form of Instantly Proven Wrong. Note that while the above are the two most likely scenarios there are also other situations where this trope is invoked, usually when whatever the characters are doing end up with everything trashed.

The fight scene in the lobby of the Matrix 1.

The fight scene in the lobby of the Matrix 1.