Crash in Through the Ceiling 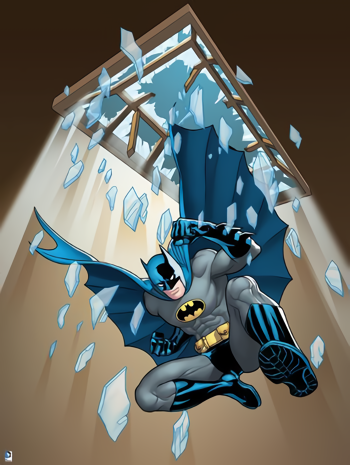 "Your entrance was good... his was better. The difference? Showmanship."
"Nice entrance. Either you've never heard of a door or you just like pulling glass out of your shorts."
— The Joker, Batman: The Animated Series
Advertisement:

There are many ways to enter rooms. There's the classic door, sneaking in through windows, and then there's the dramatic ones, going through barriers like walls, the floor, and for even more surprise, there's this trope, for making a Big Entrance through the roof or ceiling.

And usually, it's not a controlled entrance like Fast-Roping through a skylight or a "Mission: Impossible" Cable Drop, but instead, it's by accident, and characters are just dropped into an unexpected situation, occasionally thrown in by enemy action.

If this happens to a criminal, they might be Falling into Jail. And if it's the roof, and it has a chimney, this could also be a way to do an inadvertent Chimney Entry.

When they land, it might be with a Three-Point Landing. Sister trope to Floorboard Failure, which is a comparable way to leave a room. See also There Was a Door, for occasions when the character ignores a perfectly good entryway and bashes a hole in the wall instead. Compare Super Window Jump.

Through the Ceiling, Stealthily is the sneaky version of this.