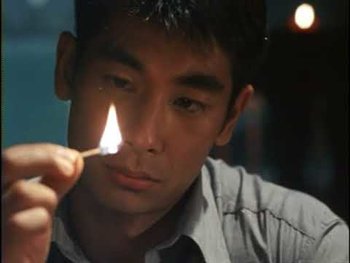 Vincent Zhao, before his audition on becoming the next Jet Li.
Advertisement:

Also known as Another Meltdown.

The Blacksheep Affair is a 1998 action movie starring Vincent Zhao (then being groomed by the studios to become a suitable replacement for Jet Li, since Li is making his move to Hollywood for Lethal Weapon 4), Shu Qi, and directed by Dante Lam.

Yim-Dong (Zhao), a Special Agent and Military Officer from China, is demoted of his duties for acting like a hothead in a hijacking rescue attempt and reassigned to the fictional European nation of Lavernia. Upon his arrival, Yim reunites with his ex-girlfriend and old flame Chan Pun (Shu Qi) and his best friend and former comrade, Hung, but on the way stumbles into a public assassination commited by terrorist mastermind and cult leader Keizo Mishima, who intends to take over Lavernia and wipe out populations of the country in a misguided attempt to prove himself as the ultimate disciple of Christ.

While a success on its release, and making Vincent Zhao a popular celebrity in the late 90s (together with his role as Wong Fei-Hung in the Once Upon a Time in China sequels, where Zhao is The Other Darrin), however Zhao's career would only take a downturn with his next movie, the Star-Derailing Role in the exploitative and tasteless Body Weapon which ends up condemning him into television drama roles and low-budget films until True Legend (2010). note  And then, True Legend bombed So much for becoming the next Jet Li! Still, Vincent Zhao delivers asskickings by the plenty and is undeniably charismatic and extremely watchable in the whatever few movie roles he had taken.