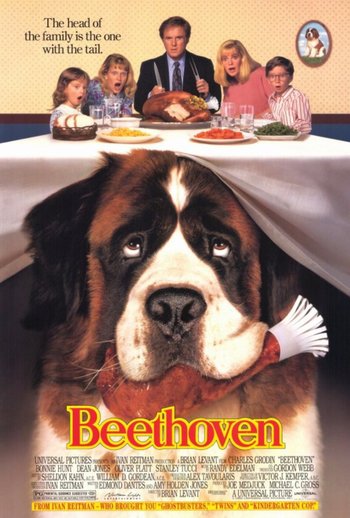 A series of family comedy films from Universal about a St. Bernard named after Ludwig van Beethoven. Unlike in its animated spin-off, Beethoven could not speak, although he still had Amplified Animal Aptitude. In keeping with the theme of the composer, the sequels were named Beethoven's 2nd, Beethoven's 3rd, etc. It was originally executive produced by Ivan Reitman and co-written by John Hughes, writing under the pseudonym "Edmond Dantes."

The original film, released in 1992, focused on Beethoven's adoption by the Newton family: curmudgeon father George (Charles Grodin), earnest wife Alice (Bonnie Hunt), Cool Big Sis Ryce (Nicholle Tom from The Nanny), geeky son Ted (Christopher Castile of Step by Step fame), and Cheerful Child Emily (Sarah Rose Karr of Kindergarten Cop fame). Unbeknownst to them, however, Beethoven is an escaped would-be test animal for a lab run by Dr. Herman Varnick (Dean Jones, who would later voice George Newton in the animated series; Nicholle Tom was the only other cast member to return for the series, providing Ryce's voice), a veterinarian who sounds like Satan and is stealing his customers' dogs for use in unethical experiments.

Reportedly, the American Veterinary Association wasn't happy about the film featuring an evil veterinarian who uses dogs as ballistic test dummies, and wrote a scathing letter to Jack Valenti, then-president of the Motion Picture Association of America. Probably as a result, the sequel has a 'safe' villain in the form of Regina (Debi Mazar), a Cruella de Vil-esque Rich Bitch and her arrogant but somewhat-dimwitted boyfriend Floyd (Chris Penn). Beethoven's 2nd was the last film to feature the original cast and the last to be released theatrically. It was also the last film to involve Reitman as executive producer.

Seven years after Beethoven's 2nd, the series was resurrected with some Direct to Video sequels. The family members were replaced with Suspiciously Similar Substitutes, with the explanation that Beethoven was living "temporarily" with George's brother Richard Newton (Judge Reinhold) and his family. This family includes wife Beth (Julia Sweeney), son Brennan (Joe Pichler) and daughter Sara (Michaela Gallo). After two films with them, Beethoven's 5th featured Sara (now played by Daveigh Chase) bringing Beethoven along on a visit to her Uncle Freddie (Dave Thomas) with the rest of the family absent. This was the last movie set in the original continuity.

Tropes specific to the first film: