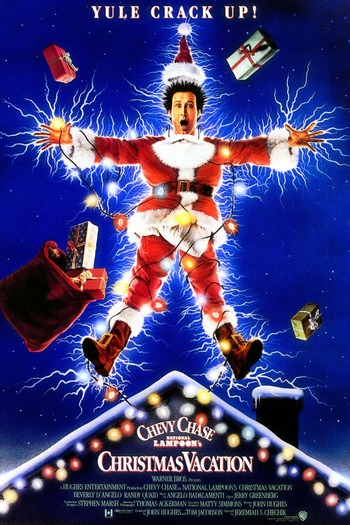 He's definitely going to be feeling that in the morning.
"Where do you think you're going? Nobody's leaving! Nobody's walking out on this fun, old-fashioned family Christmas! No, no! We're all in this together! This is a full-blown, four-alarm holiday emergency here! We're gonna press on, and we're gonna have the hap-hap-happiest Christmas since Bing Crosby tapdanced with Danny Fucking Kaye! And when Santa squeezes his fat white ass down that chimney tonight, he's gonna find the jolliest bunch of assholes this side of the nuthouse!"
—Clark W. Griswold Jr.
Advertisement:

Released in 1989, this third installment in the National Lampoon's Vacation film series was directed by Jeremiah Chechik and cowritten by John Hughes. Chevy Chase and Beverly D'Angelo once again star as Clark and Ellen Griswold, with Juliette Lewis and Johnny Galecki appearing this time out as Audrey and Rusty respectively.

Clark has decided to host nearly his entire extended family at his house for the holiday season, including his parents (John Randolph and Diane Ladd), his in-laws (E. G. Marshall and Doris Roberts), his crotchety Uncle Lewis (William Hickey) and senile Aunt Bethany (Mae Questel, in her final role), and his possibly-inbred cousin-in-law Eddie (Randy Quaid). Meanwhile, he's counting on a large Christmas bonus from his boss (Brian Doyle-Murray) to help pay for his surprise present for the family: a backyard swimming pool. As can be expected, everything goes horribly wrong in the most hilarious manner possible.

The film is notable for being the only entry in the Vacation series to take place at the Griswold home. Many families consider it a classic holiday movie, especially for its chaotic yet not-too-far-off portrayal of family Christmas gatherings.

In 2003, a Made-for-TV sequel entitled National Lampoon's Christmas Vacation 2: Cousin Eddie's Island Adventure was released, which featured Cousin Eddie as the main protagonist, making it more of a Spin-Off than a sequel.

"We're going to have the hap-hap-happiest Christmas tropes ever":

The animated opening to a famous holiday comedy.

The animated opening to a famous holiday comedy.