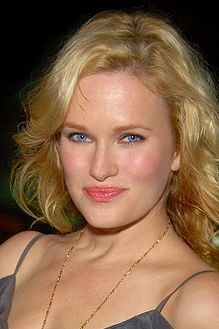 Nicholle Marie Tom (born on March 23, 1978 in Hinsdale, Illinois) is an American actress who is known for her roles as Ryce Newton in the Beethoven film series (along with the animated spin-off), Teen Reporter Cassie in The Princess Diaries, and Maggie Sheffield on The Nanny, along with portraying additional roles in Gotham, Criminal Minds, and Cold Case.
Advertisement:

Her siblings are actors David Tom and Heather Tom. Not related to Lauren Tom.

Tom is also a voice actress. She is well-known for voicing Supergirl and Power Girl Expy Galatea in the DC Animated Universe.