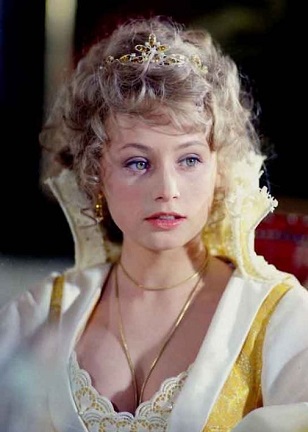 Arabela is a highly successful and charming children's television series produced in Czechoslovakia and aired between 1979-1981. The series was directed by Václav Vorlíček and it spans 13 half an hour-long episodes.

The premise of the series is that the world is split into two interconnected parts: a world of humans and a world of fictional stories. While our world is organized into countries, the world of fictional stories is organized into kingdoms, with the medieval-looking Kingdom of Fairy Tales playing an important role in the story. By creating tales and characters, the human world unknowingly helps the other world expand and grow. While travel between worlds is possible through magic, the denizens of the world of fiction tend to avoid going to the human world and thus humans remain blithely unaware of the truth.

Enter Mr Karel Majer, an ordinary man who works minor jobs in television. One day, while he was working as an extra on the set of a film, he unearths a magic bell which summons the sorcerer apprentice Rumburak, who has the duty to fulfil the wish of whoever rings the bell. Remembering the disappointment of his son and his friend when he failed to get them a prize by shooting the mark at a fair, Mr Majer asks Rumburak to teach him how to shoot. The sorcerer agrees and takes him to the forests of the Fairy Tale world, where Mr Majer accidentally shoots the wolf from the Little Red Riding Hood story. This upsets the balance of the kingdom, as Little Red Riding Hood now lacks a character to reenact her story with, and is rendered purposeless.

When King Hyacint, the ruler of the Kingdom of Fairy Tales finds out about what happened, he punishes Rumburak by stripping him of his apprenticeship and turning him into a wolf, with the specific instruction to take the place of the wolf from the story. Enraged, the sorcerer rebels against the royal punishment and concocts a plan to take over the entire kingdom and marry the king’s youngest daughter, the lovely princess Arabela.

Owing to the success of the series, the director created a sequel named Arabela Returns in 1993, but it failed to gain the popularity of the original. Part of that was the decision to have Arabela and Petr play supporting roles and some inconsistencies related to characterization. Taking place ten years after the events of the first series, the story focused on Rumburak enchanting Arabela's unborn twins, which led to them being born as old men instead of babies. Arabela and her now-husband Petr must travel in-between worlds to fix the damage caused by the evil sorcerer and return their children to normal.

Also, Rumburak got his own movie in 1989. It shows his life after being exiled into the Human world at the end of Arabela, a crow by day and human by night.

The series plays around with many fairytale and character tropes and boasts some really pretty costumes. It was very popular in the '80s with Eastern European and even German viewers, and many people who were young in that period of time remember it fondly.

This television series provides examples of: