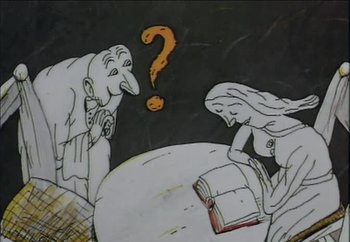 Words, Words, Words... (Reci, Reci, Reci...) is a 1991 animated short film from Czechoslovakia (the part that is now The Czech Republic), directed by Michaela Pavlatova.

This seven-minute short concentrates on the customers at a restaurant. Despite the title of this short, we don't actually hear anything the customers are saying. Instead, while the diners at the restaurant mumble non-verbally, their conversations are represented by symbolic animations that express in amusing ways what the people are saying.