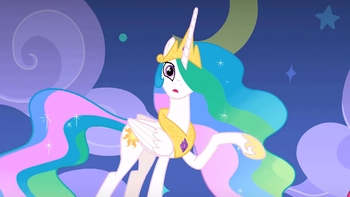 It's time. For a new day. In Equestriaaahhh.
Written by Kaita Mpambara
Advertisement:

In honor of Princess Celestia's "ones-versary" (the 1,111th year since her first raising of the sun), Twilight Sparkle and her friends are putting on a play about Celestia at the School of Friendship, and Twilight, on a spur of the moment decision, offers Celestia the opportunity to star as herself in the play. Celestia is overjoyed, having seen her friends, while a filly, act out in plays, and having wanted to do it herself but never having the time.

When they return to the School, most of Twilight's friends fret about how Celestia's involvement will affect the play, but Rainbow Dash is more optimistic and flies off to tell everypony she knows about this. The others start rehearsing the play, but it quickly becomes clear when Celestia takes her role that she has no acting ability, speaking too softly or too loudly, getting too excited, and at one point accidentally opening a trap door on the stage, causing the students to fall and break the sun prop stored there. Twilight's friends, particularly Applejack, warn Twilight privately that she should confront Celestia about her poor acting skills, but Twilight refuses, and instead enlists two of the Method Mares to help give Celestia acting lessons while the others work to rebuild the sun prop.

Celestia has extreme difficulty in learning how to act, while Pinkie's attempts to replace the sun prop fail. Twilight's friends suggest that maybe they should cancel the play, since they hadn't announced it to anypony else yet, but then Rainbow Dash returns, informing that they'll have a big audience that night. As ponies start to arrive for the show, Twilight tells the others that she's rewritten the script to put Celestia in a non-vocal role, which the others still feel is a bad idea. Just then, Pinkie reveals her latest replacement for the sun prop, a stock of firestocks she purchased from Trixie in a back alley. The fireworks go off, ruining most of the other props, and setting Twilight in a rage over how bad Celestia's acting is. Just then, the backdrop falls to reveal Celestia, who had heard Twilight's tirade, and she flies off alone not because Twilight insulted her acting skills, but because Twilight was not honest with her.

With the crowd getting restless, Twilight has Spike help entertain the crowd while she chases after Celestia. She apologizes to Celestia for her harsh words, but Celestia is less disappointed about that than the fact Twilight wasn't honest with her about her being a bad actress. Even Twilight admits that Applejack tried to tell her, but she didn't listen to her and now Twilight feels like she ruined the whole play because of her dishonesty. After reconciling, Celestia agrees to come back to help put on the show, but knows she won't be acting. Back at the stage, Celestia quickly orders Twilight's friends to manage replacement for the props and backdrop, and asks Fluttershy to play her instead. Fluttershy briefly panics, but Celestia reassures her that she can do it. The play starts awkwardly, but soon progresses in a pleasing manner through Celestia's stage management, and, when it is time to raise the sun, Celestia uses her own power to raise the real sun, stunning the audience and making the play a success.

As the show winds down, Celestia tells Twilight that she's decided to no longer be a princess and take up full-time acting. When Twilight freaks out over that, Celestia tells her she was just kidding, but that she does know how to act too.